Have made some progress on the "Timber Opening" or trestle project.  It is convenient that the railways loved utilising 12" x 12" girder components for a host of structures as it makes my life easier.  This example is of the 14' variety which equates to 14' centre to centre of the bents.  The transoms have been given bolt detail which follows prototype practice in being staggered from one transom to the next.  All other detail has been included and the only divergence from prototype being the capwales and angle bracings not checked into the piles and while this feature would be nice to achieve...it is very time consuming and to my eyes the present method does not detract too much from the overall scheme.

The base utilised for construction is 3mm acrylic with the pile holes laser cut as a jig arrangement.  The difficult part about this project is the age old question...How Long and How High???.  To ever be considered as a kit it would need to be decided as each modeller has their own requirements.  In the next few weeks we will ( with help from other modellers I hope ) decide which variety to look at first and try and work out a construction method which utilises a span by span ability...easily said!!!

Well if nothing else it has been an enjoyable time spent researching, measuring, developing and building this example.  There are wing assemblies completed for this version and I will post some completed shots.  We have now also built a jig which when loaded with timber,  machines the rebate in the outer piles where they meet the girders and irrespective of what height the bents are made this will make this operation a hell of a lot easier.  Now to find a spot on the layout!!! 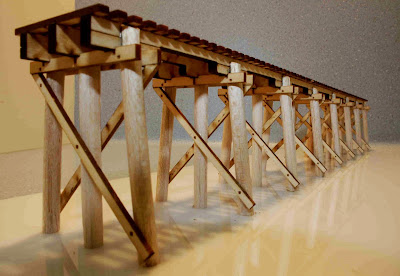 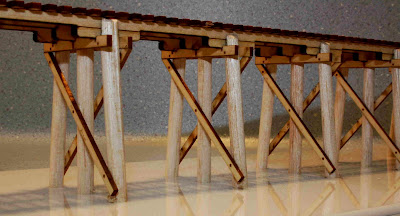 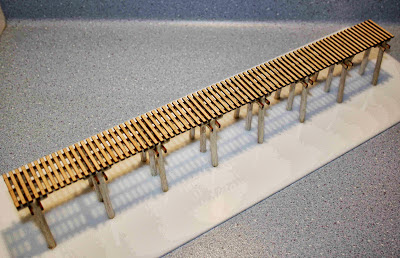