Before I get down to the modelling side of things, it would be remiss of me not to pay homage to our latest New South Wales preserved steam recruit.  Following an extensive rebuild in Canberra and a couple of trial trips to Goulburn, Beyer Garratt locomotive 6029 finally stretched her legs on the Main South and was a star attraction throughout last weekend.  Fortunately, I live opposite the main south railway at North Goulburn and captured it's passing last weekend.  I had planned to chase it but due to the foggy conditions, made do with a couple of shots out the front, comfortable in the knowledge that we will see much of this loco in the future. I have included one of the original shots and also had a play in Lightroom to recreate the past in black and white...anyway, I hope our OS modelling friends also enjoy a view of our newest preserved kettle. 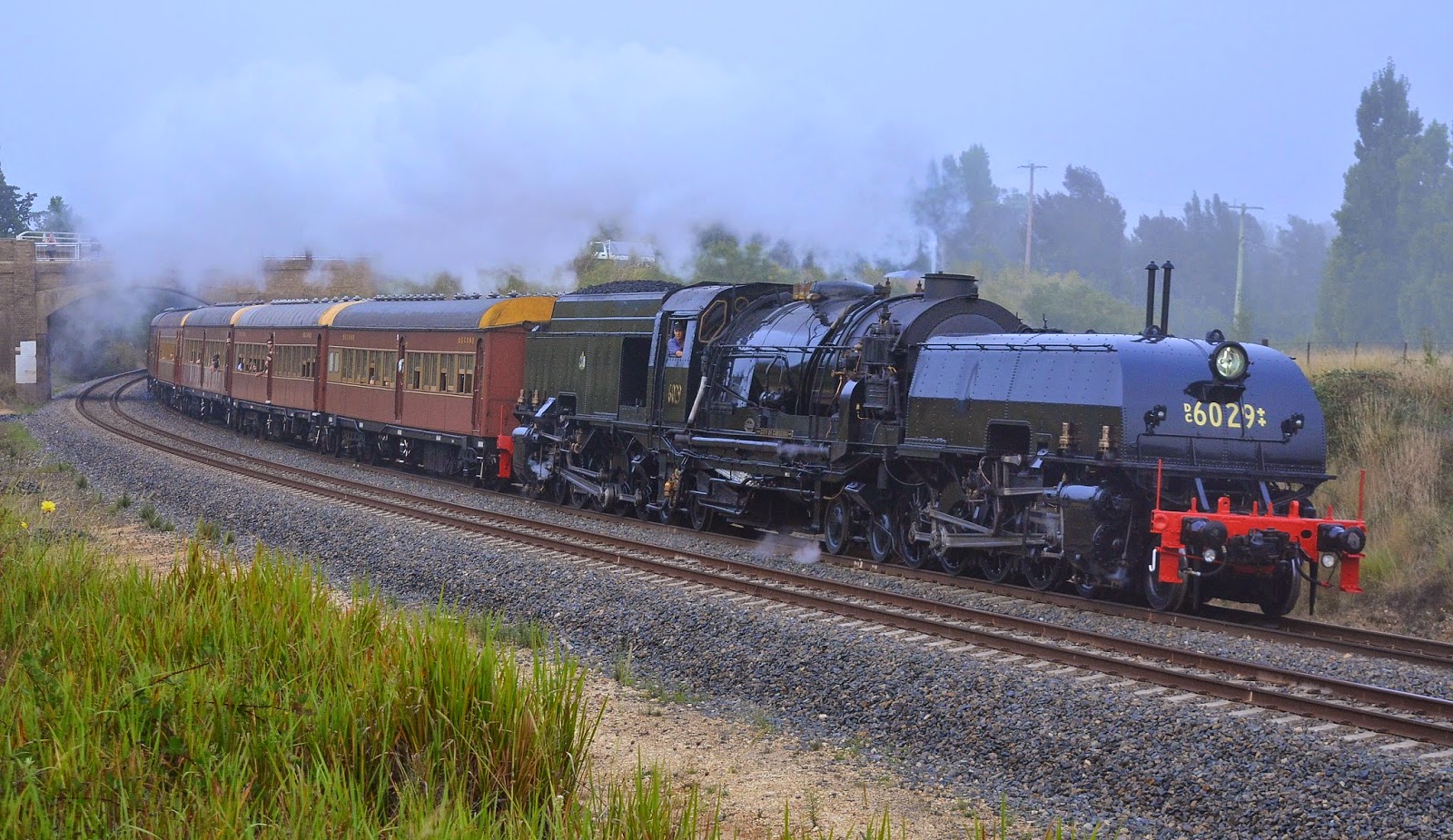 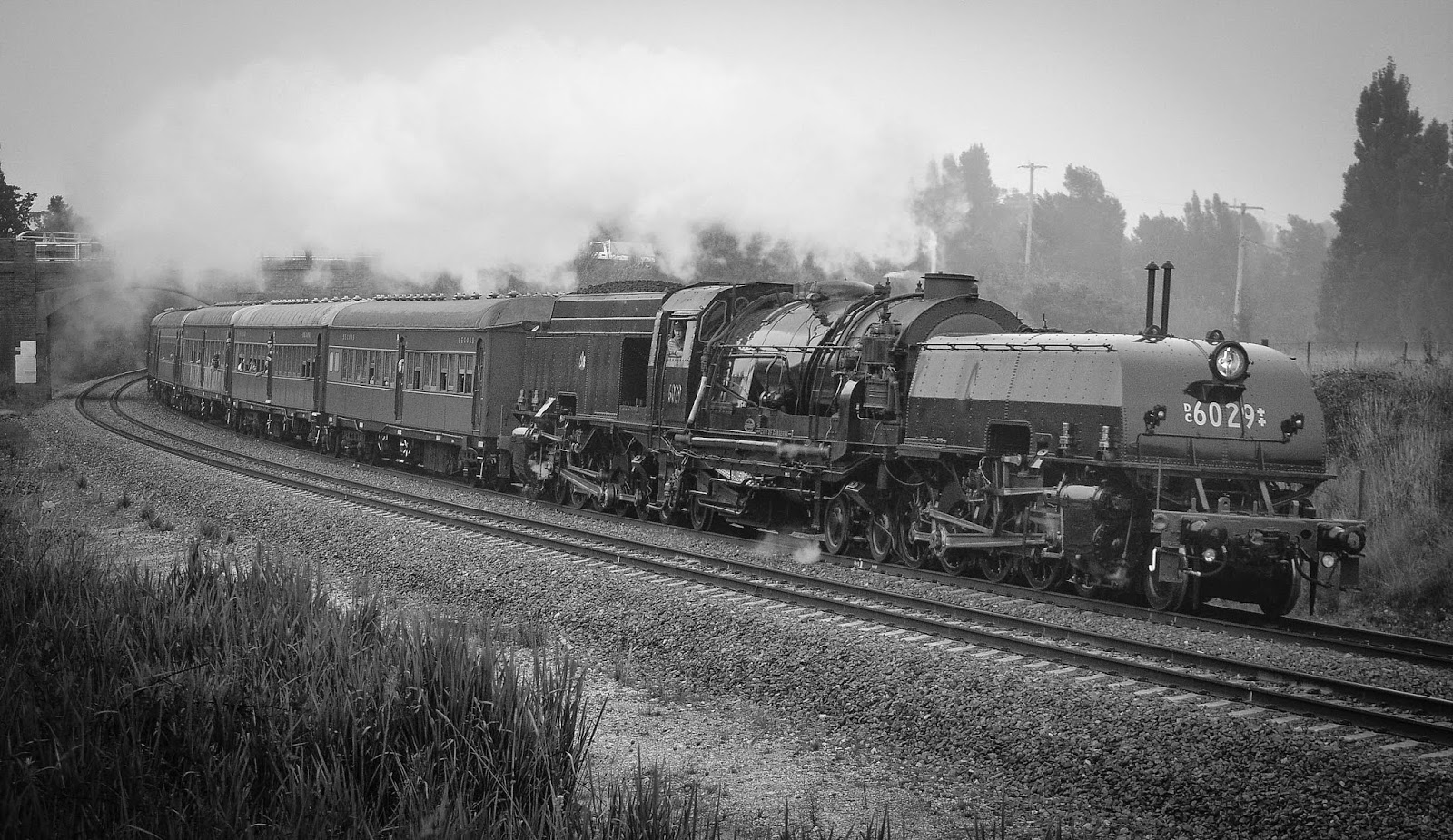 And now back to the modelling....

Earlier today I received a package from Mike at DCCSound which contained the much anticipated "voice box" for my Auscision 45 Class.

Much has been written regarding these locos...so as to not bore everyone with yet another review of this release, I thought I would just offer my experiences with the DCC and sound conversion.

First things first, and following the obligatory perusal of the loco instruction sheet...disassembly was commenced. It may well be that Murphy decided to pay a visit to the workbench but the normally simple removal of the couplers proved to be a real pain in the proverbial.  Due to coupler box / pilot clearances, they certainly were not about to slide out through the pilot forwards and so after a period of cajoling, I finally had to slide the coupler boxes inboard until the coupler trip pin was against the pilot and then remove the coupler box lid ( again inboard ) and this then allowed the removal of the coupler tang forward and the coupler box base and sheet spring were then removed from behind the pilot as well.  (Reassembly was obviously the reverse of this fiddly method).  With the couplers now removed and the four chassis / body screws removed, the body came away very easily indeed.

As I have said in earlier posts, I do like Tsunami decoders, but as Auscision persist with 21 pin sockets on the boards and the lighting circuits become more intricate...I will continue to utilise DCC Sound on this manufacturers offerings.  Installation of the decoder is very simply a case of removing the existing board and plug in the Loksound offering.  Care has to be taken due to the length and relative fragility of the pins.  Orientation of the decoder is also important but close inspection of the  dummy pin and decoder plug should ensure all goes well.  In this case the decoder is fitted under the main loco board and is a very close fit with the speaker enclosure. The overhang of the decoder is also an issue to keep an eye on and I finished the installation with Kaptan tape to ensure the decoder did not become dislodged over time and to also keep the two mating parts ( decoder and main board ) parallel.  The supplied speaker is a very nice and snug fit to the enclosure and the only gap that requires sealing is the speaker wire recess in the speaker enclosure.  All in all a very neat conversion.

I programmed the loco earlier this evening and as much as I have had no time to fiddle with the settings with Decoder Pro... the "factory settings" sound and operation is stunning.  Unlike the DCCSound 48 class decoder volume issue...the 45 class offering is quite "audible" straight out of the box and more than likely the master volume will require reduction at some time in the future.  The sound quality is unmistakably "45 Class" and to my ears is nothing short of stunning and a credit to Mike and the DCCSound team.  Presently the loco is set to 28 speed steps and performs brilliantly with silky smooth start up and very nice momentum ( straight out of the box ).