Well we finally have the first "pilot" models of the next instalment in the bridge series....being the double track level approach variety.

Three completed examples were constructed during the week and me being a fussy type person... I have mixed feelings about the end result thus far.  It has to be said that while there are comparatively few detail photos available of the single line variety in existence....there is virtually none of the double track examples to gain info from especially period shots before modifications were made over the intervening years.  Sure there are at least two double track timber bridges within fairly close proximity from home....but it is hard to say to what extent these bridges have been repaired and or modified in the past.  Certainly the expected traffic loads that were factored into bridge design during the late 1800s /early 1900s would have shown inferiorities when compared to today and this coupled with rot, termite damage and shear wear and tear would have also played a part in changes and reinforcement design.

If anyone has double track span timber road bridge plans, photos or a lead to a photo location in the many prototype books available that i may have missed...I would appreciate your assistance.

To my eyes the pilot examples look a touch underdone in the girder department between the two bents ( or span ).  I have a plan that show a single 12" x 12" girder with corbels...as per the pilot models in this post... but I have seen bridges constructed with an added 12" x 12" girder between spans....The bridge spanning Cooks Cutting just south of Yarra on the main south does have this feature.  I will build a couple more including this feature during the week and post the shots for comparison.  It may be that these differences will play a part in releasing multiple variations around a basic design.  I have also wondered whether these bridges lend themselves to being manufactured and released as one off built units? ...Time will tell....I can be assured that my circle of modelling aquaintances will let me know if this idea has merit.

One other hard to decide dimension is the overall length....This is an almost impossible task to get right as each layout and the owner's scenery wishes are different....another attraction to custom built and weathered bridges?

The important vital statistics of the "pilot" models are:

Overall length: 210mm,  Deck Width ( with Kerbing ): 70mm, Inside Pile to Pile ( Bent Clearance ): 115mm,  Deck Height clearance can be varied by utilising extra footing pieces which will be included with each bridge.  This clerance all depends on how the bridge is fitted to the layout.

As per normal the three existing pilots will end up on ebay as there are just too many bridges littering the workshop at present... 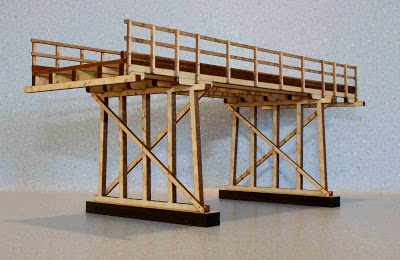 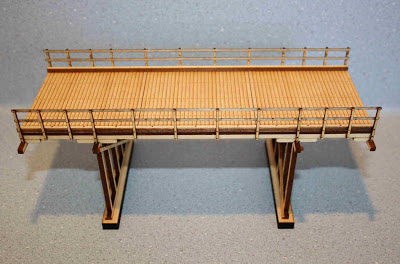 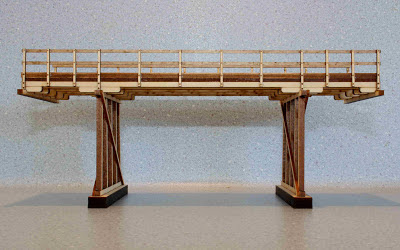