Another Day, Another Adventure...

Decided to go "over the hill" to Gunning this morning to catch up with some friends for a spot of breakfast. For those unfamiliar with the area, the old highway is still available as a brilliant alternative to the new highway and Gunning bypass.  The old road can be accessed near Breadalbane if heading south from Goulburn and runs at arm's length (and sometimes closer) to the Main Southern Line through such exotic locations as the aforementioned Breadalbane, Mutmutbilly, Cullerin, Fish River and of course Gunning before rejoining the main highway to the south.  There are plenty of photographic locations along this stretch of road and for the history fan there are plenty of opportunities to marvel at the original railway alignment that can still be readily seen at many locations which provides a window to the past before the main southern line was duplicated through this area around 100 years ago.  I must confess that if I had a week to spare it would be a timely and enjoyable experience to photographically document these deviations and compile them for an article in one of the relevant publications.

So what has all of this got to do with this post.... Well, there are not many timber overbridges left on the main south and there is one located  a couple of kilometres north of Fish River.  This angle approach double track span example has been on my "must investigate" list for a few years now and today was the day!.  A few years ago this bridge was in a sorry state and when I one day witnessed a group of workers and the dreaded orange barrier tape near the bridge I thought I had blown my chances of recording it's existence and was somewhat surprised when later informed they were here to repair and not "nuke" the thing.  To make matters even better this repair was to be carried out utilising like for like materials and not a slab of pre-stressed concrete in sight.

The trek to the bridge was taken by foot as the access road was quite wet and boggy in places and a walk was not going to kill me.  With the winter now upon us and the temperature in single digits,  I still encountered a shingle back lizard sunning himself and a regulation size brown snake sunning himself next to the bridge....we had a short discussion and came to the agreement no further action would be taken if we both minded our own business...He dozed, while I took photos... a fair enough outcome I thought.  While on the subject of animals....why is it that cows have a modicum of intelligence and sheep are completely devoid of any mental ability???....

This particular bridge would have originally come into being when the line was duplicated and realigned to the east by about 200 metres which would have meant a resumption of the landholders pasture which in turn would have ( without the bridge ) rendered the land on the other side of the mainlines inaccessible.  The bridge while certainly able to withstand vehicular crossings, would have provided safe and easy stock transfer rather than traversing the mainlines via a level crossing.  The shots below also serve as another example of a timber bridge with square piles...but the design is certainly different to a main road type overbridge.  The renovation has been done in  a historically sympathetic way with only the mini-orb corrugated sheeting being an obvious sign of the present.

This example of a timber overbridge certainly gives me another example to design around...All in all a good day!!!

As a modelling footnote, I may just look at incorporating some "deviations" to my layout if given the right circumstances as they certainly would add some interesting scenes and points for discussion. 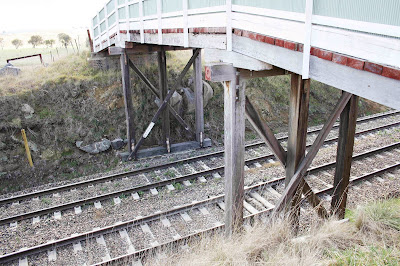 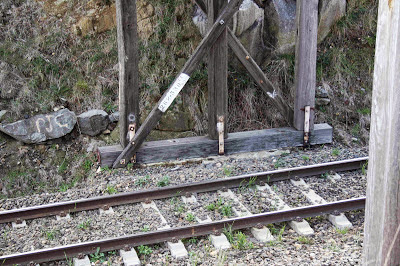 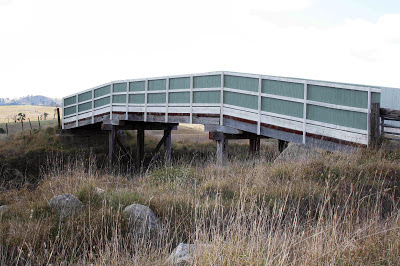 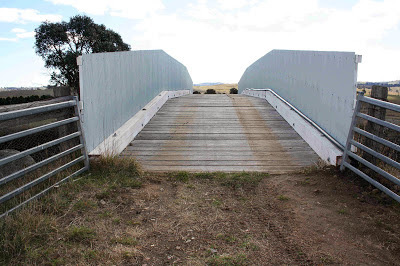