My daughter often says to me "Build A Bridge Dad!!!..." whenever i need to get over something.  So i took her advice and made a start over the weekend.

I took advantage of the somewhat cooler day today, cranked up the lasers & commenced catching up on replenishing existing kits & also looking at the plethora of foreign one off orders i also have to complete.

In between reloading the machines with timber i decided to also take a look at a structure design that has been on my mind for some time...that being a timber road bridge with angled approaches.  While i have some photos of prototype bridges, i only have drawings of the Wauchope example & with all of this info mentally pooled there was enough info to at least  make a start on a generic example.

As i have stated before...to my mind the magic of our latest kit rests with the one piece composite component of the column & bearer assembly & so as i perused the plans of the Wauchope road bridge it became apparent that this methodology could be adapted to this road over rail timber example which would reduce kit construction time markedly.

The bridge in question is 5 Girders wide & if creating the components singularly this would equate to 15 individual girders... 5 each for either end wings & 5 for the central deck.  The first development drawings incorporated the girders as one piece....but upon further investigation & some laser trickery it was possible to not only machine each girder in it's entirety...but also to add the corbels as well.  I have now machined & built two samples with the decking installed & the results are promising....


The Datasheets drawing of the bridge in question...Of interest is that the prototype had a slight variation in length of the wings..... Again the Datasheets range is indispensible when checking details & dimensions....The hobby owes Greg a debt of gratitude.

Clicking on the photo should enlarge the image enough to peruse the girder & corbel detail.  The next few decisions with the kit will factor around height of the bents & the type of footings that are offered as there was significant variation with this type of bridge.

The components in question so far... the girders are one piece & incorporate the corbels with a laser cut line to indicate the join in components.  There is no need to add the but joint simulation where the girders join as these are hidden entirely when the deck posts are added. 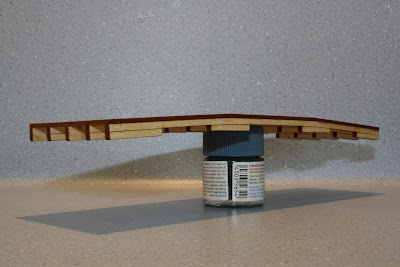 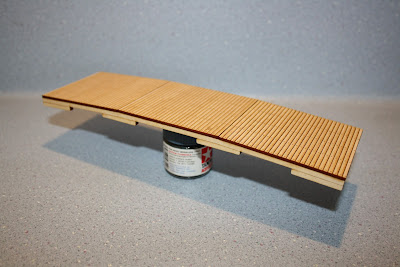 The trial deck with girder assemblies installed...It may also be possible to utilise a one piece kerbing assembly as well with simulated joins as there are two each,  scale 9" x 5" laminated that are placed on either side of the decking....

I can see that with all of the incorporations that are possible... It will cut down assembly dramatically while still representing a dimensionally accurate, well detailed & durable scale example... The last thing we want to produce is a "box full of bits" type kit that upon opening takes away the inspiration to complete the kit.

Anyway that is progress to date on this kit & it will certainly be an addition to the upcoming bridge range. Both this & the flat deck bridge are being developed in unison ( and together as well!!! )....Will post progress as it occurs...

I will now need to look at double track styles before i start being labelled a "singletrackite"...

And one last thing before someone asks.....No... the layout is not getting any attention at all.