With the long weekend upon us & nice sunny days ( after -6 degree mornings ) i thought it was time to get the airbrush working.

I have been keen to get the Austrains 4 wheel tank wagons out of their boxes & commence an attempt to give them a makeover.

A lot has been written about this range, with most of the talk centred around their prototypical origins & weight.  No doubt they are a heavy little bugger.  Contrary to some, this issue does not concern me as i am a fan of weighty 4 wheelers as they dont have a tendency to run away when coupling up & shunting.  As for their prototypical relevance...again this does not concern this little black duck as all the rollingstock destined for the layout will be treated to airbrush abuse.

Out of the box they appear as though they have come from the "Island Of Sodor"  & upon closer scrutiny i am more concerned with the running quality & choice of coupler.  I have bought 5 boxes of the different offerings & decided before any work commenced i would couple them up & give them a run.

I spent a frustrating hour trying to keep all 15 wagons coupled together as i shunted them up & down the 13 or so metres of mainline that has been laid.... The other issue is the fact that the wheelsets on at least 8 wagons showed signs of being eccentric & these wagons tended to bob up & down quite visibly as they travelled along.

I am accutely aware that these wagons were offered under the "Basix" range and as such i didn't expect them to be world beaters...but inferior couplers & eccentric wheelsets?....I would have thought that you would spend more time getting these wrong & than right.

With all that said after some renovation work they will fill a void in my rollingstock roster & i am sure i will be able to improve on the shortfalls....Therefore even with the issues described a welcome addition.

I have so far commenced makeover on 8 wagons & now need to create some decals of choice  ( Oil Company & wagon numbers ) & complete the weathering to finish them off.

There are 2 silver un-liveried units & i will almost certainly mark these up as "Shell" & when these & the balance of the wagons are complete will post some more photos.

I have posted some photos of progress so far...so enjoy... 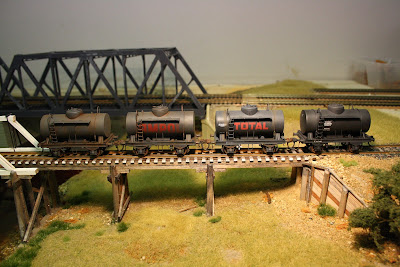 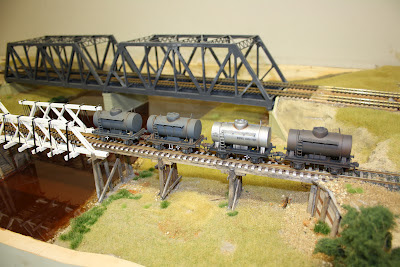 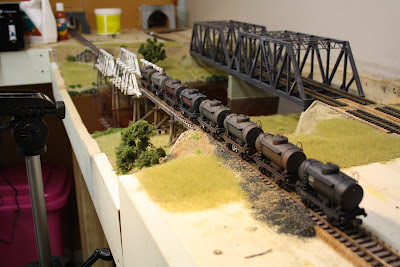