As alluded to in an earlier post....I have commenced fabrication of the components required to recreate the road bridge at Cooks Cutting south of Goulburn...

This bridge differs from the earlier post's subject in quite a few design details.  Firstly this incarnation will span a double track. The piles are round & not square, the bents are of a different design & the guardrail railings are of another design.....just to name a few.  Geez...it may of been easier to just say its a different bridge altogether!!!

I have not done a full study of timber road over rail bridges....but it would seem that at some point there would have been parent designs that were adapted for each situation & indeed repairs & strengthening undertaken over the years have changed the appearance.  It may well be that available local supplies of timber & methodology may also have impacted on the final product.

With that said.... i have incorporated some changes in fabrication & construction with an aim to add some extra detail.

Firstly i have added, via the laser,  bolt detail where the deck timbers attach to the bearers.....If you look at the photo describing this you may well think they look too uniform.  I felt the same but of the bridges i have inspected this appears to be the norm.

While the guardrails have not as yet been fitted, the strength of the guardrail staunchions has been a concern to me for some time, as they will ultimately get impacted at some point when installed on the layout.  Up until now i have utilised either basswood "with the grain" or plastruct shapes.....Neither of these is a long term fix & indeed at times they have detracted from the model due to being way overscale.  On a recent trip to a hobby shop i spotted some 1mm brass angle manufactured by Albion Alloys.... I grabbed a couple of packs & only realised when paying that it works out at around $10.00 per 30cm length.
If this product proves succesful then i will try to source bulk or search out an alternative.  It must also be added that even this size angle is a touch overscale for a representation of a 50mm x 50mm angle iron in 1:87

The bents will also feature the norm of Grandtline bolt detail....

Who knows with all the materials i have aquired it may well prove worthwhile to release some of these items as kits under the old Laser Rail Bits brand....either that or they will make good Xmas presents !!!

Anyway i have posted some photos of progress & will update soon 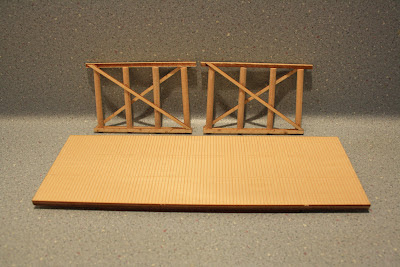 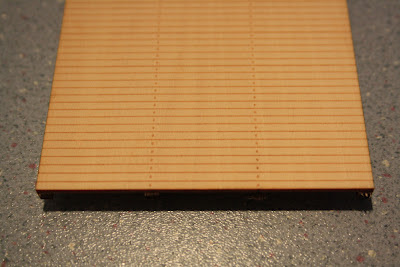 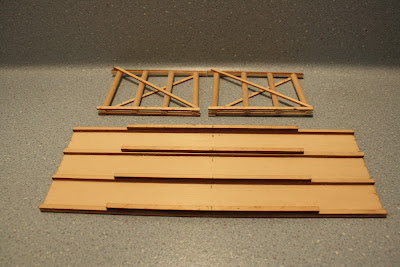