A Sad and Humbling Experience...With a Happy Ending!

During any given week I normally get at least a couple of visitors to my "trackside" workshop.  While the primary focus of my week is to earn a living...the outside contact and interaction is in reality much appreciated and certainly takes the monotony away from my fairly solitary working environment.  Of course having an absolute front row seat to the passing parade of trains traversing the main south on a day to day basis and being fortunate enough to get a "noisy" greeting from most crews that are either friends or aquaintances is a luxury never lost on me.

Amongst the regular visitors is a bloke by the name of Leon Oberg.  Leon normally drops past while out on one of his almost daily photographic adventures to check on the latest position of a train that he is chasing. On other occasions it will be a combined visit that also includes "sorting out the problems of the world" as we see it.  Now, as much as Leon has only a passing interest in the model side of the rail hobby...he does however have an appreciation of it and is always intrigued by my latest project that is taking up bench space somewhere in the workshop.  It must be said that Leon is a bit of an enigma in this town mainly due to his almost lifelong career as a senior journalist with our regional newspaper and as much as he is an extremely accomplished photographer and prolific author of many rail related publications...it is his tenure as a journalist of long standing and his involvement in community organisations that he is normally recognised for locally.

With the above description in mind, Leon never lets an opportunity for a "story" to pass him by...and when he first laid eyes on the "G" gauge layout that once adorned the backyard here some 10 years ago, he leaned on me pretty hard to create a story for the local paper.  I resisted many of his overtures, mainly due to the fact that I did not want to divulge the location and my details for many reasons... security probably being the most uppermost in my mind...and also because I saw my little empire as a not very newsworthy subject amongst the locals here.

Moving forward to earlier this year and during one of his visits , we were discussing his latest story in the Byways Of Steam series that covered the Captains Flat Line and I proceeded to show him the early version of the Captains Flat ore loading structure that I was working on.  Almost immediately he suggested that a story covering the "hows, whys and wheres" of what I build should be turned into a story and this time I decided to submit to his wishes...after all what damage could it do and hey it might well be a bit of fun...He immediately produced his ever present camera gear and photos of some model items were taken and a field trip was organised for the following week so he could get a better feel for the research side of things.

The next week, we met up on a perfect Autumn morning somewhere along the (long closed) Crookwell Line and amongst the chit chat he took some more photos and the "story" was roughly cobbled together. During that chat we of course discussed our families and what they were up to and as lunchtime approached...we went our separate ways and made a "rough" timeframe to meet up finalise the story.

As fate would have it...only a couple of weeks later I had reason to ring Leon as I had promised earlier in the day to update him about a train that he was chasing.  Immediately upon answering my call...I knew that something was extremely wrong...After what seemed like an eternity he had composed himself enough to describe that he had just had a call that all parents dread and the result was to ultimately change his family, relatives and friend's lives forever.  It has now been widely reported that his son Peter, was lost at sea due to an incident during a fishing trip...

The only positive to come from these "life experiences" is that you tend to reassess what is important and re evaluate the real priorities in life.  It was heartening to see the vast amount of locals who turned out for the memorial service for Peter... and the support for the family in the weeks that followed...it is a credit to the family's strength and that Leon now outwardly has returned to normal...but no doubt the empty feeling of the loss would still be close by.  And so it was with a great deal of surprise when I became aware that the story that he had been quietly and silently working on had been resurrected, completed and now adorned the pages of the latest Track and Signal Magazine...very humbling to read his offering, knowing what had occurred in the previous weeks...

As for the "Happy Ending" to this story...well, that all comes from the fact that Leon has returned to some form of normality in his life and seems to be in a "good place" presently...He is now regularly track side and has returned to writing....certainly inspirational.   For me I guess there is still a certain amount of bewilderment as to how things so prophetically changed in such a relatively short space of time from that initial decision to do this article through to now...I guess the silver lining to the whole experience has been the ability to do my little bit to promote such a great hobby....OUR HOBBY! 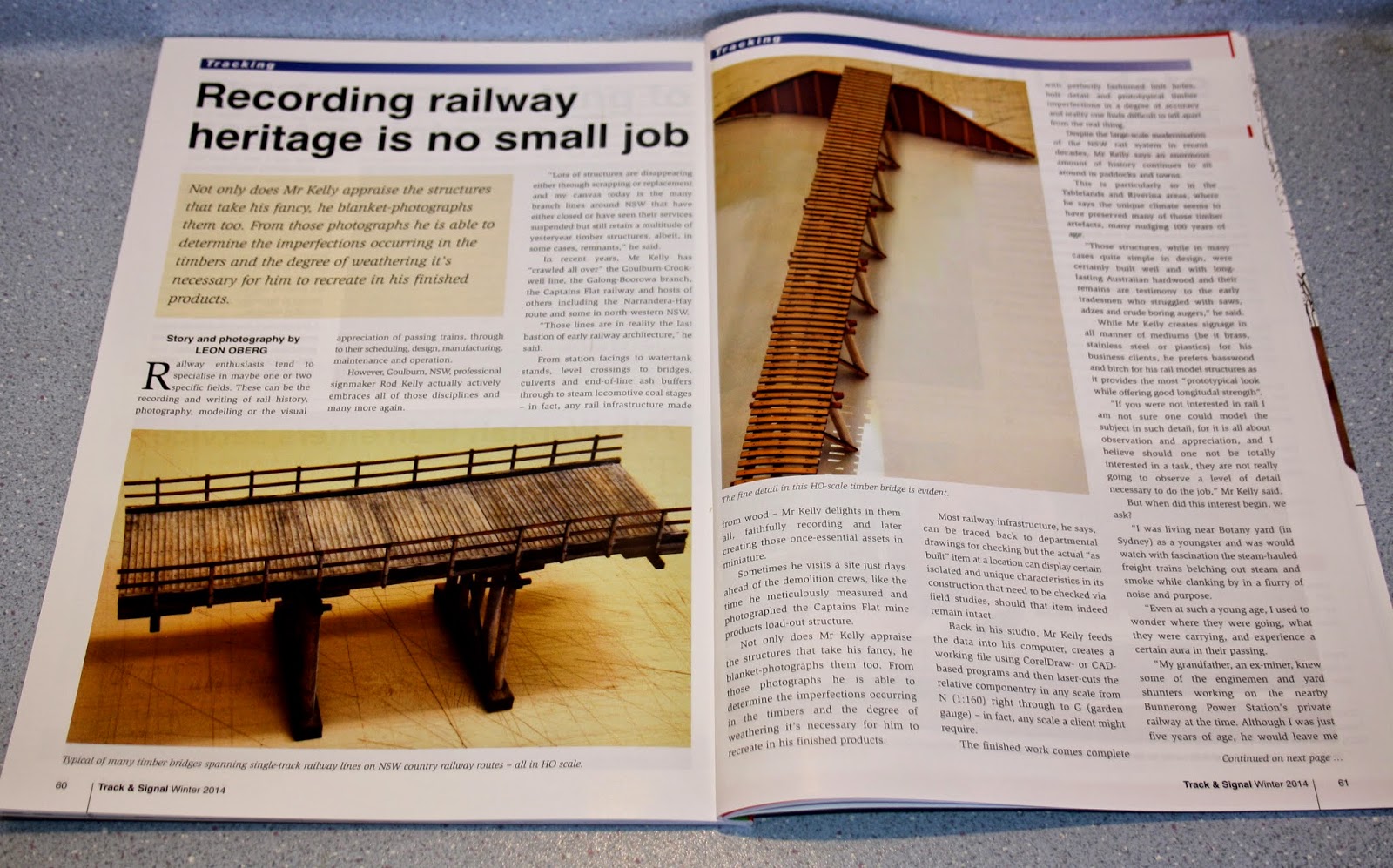 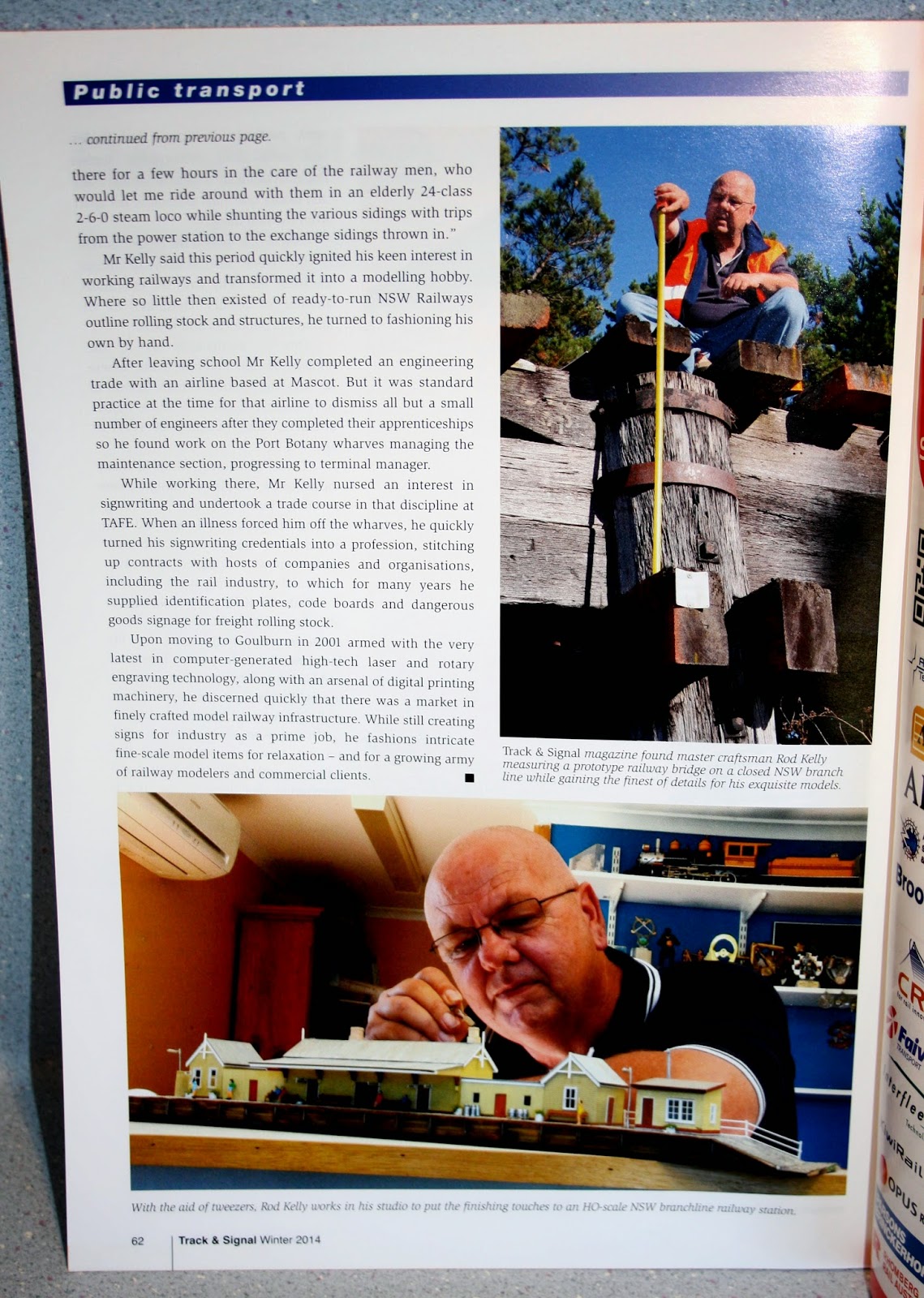