Following a fairly hectic week I decided to have a sicky today.  Yes i know most of you are aware I work for myself but about twice a year I gift myself a day off which keeps me mentally in touch with salaried workers.   These "sickies" normally coincide with a busy work schedule & that's the magic of taking a day under those circumstances... It is pointless taking a sicky unless you feel guilty about it!!!  Mind you I don't get paid....but sometimes it helps the soul.

Earlier in the week we took delivery of an order of basswood & other stuff which should have included a large quantity of 3mm/ 1/8th sheet.  This material was earmarked to commence production of the first two timber road bridge kits but Murphy's Law kicked in and half of the order went missing during shipment.  After kicking the cats around for about an hour I decided to look on the bright side of things & that was the fact that the 6mm or 1/4" sheets had arrived & so a start was made on some O Scale items we had in the pipeline....

We were approached by Gary from The Model Railroad Craftsman, a while ago, who expressed interest in our long mothballed "O" range of products but specifically enquired into our ability to "upsize" the timber water tank stand.  Of course I relished the opportunity & decided that today was the day to create the tank stand on steroids. I am of the understanding that Gary has a tank on the boil & at this stage we will supply him with componentry & see what he comes up with.....To move Gary along...give him a call to discuss details & tank arrival timeframe.

Before i go any further & run the risk of a Railpage type verbal scale/gauge exchange...The tank stand is being manufactured to 7mm scale...but with the size of this unit...1/4" followers should not be offended either.

In comparison, the only real difference ( apart from shear size ) from the HO kit version is the economic viabilty of producing the columns & bearer assembly in one piece.  This variation is of little significance with the size of the components proving very easy to assemble.

I have included a couple of pics of the first test assembly.  With this now achieved I will measure up, design & manufacture some extra detail items such as brackets & nut/bolt detail & then post some more shots when these are fitted.

I could not help myself & also took the opportunity to get the wire brushes & washes out and weather the assembly while I await a sample tank from Gary so final dimension matching can take place. 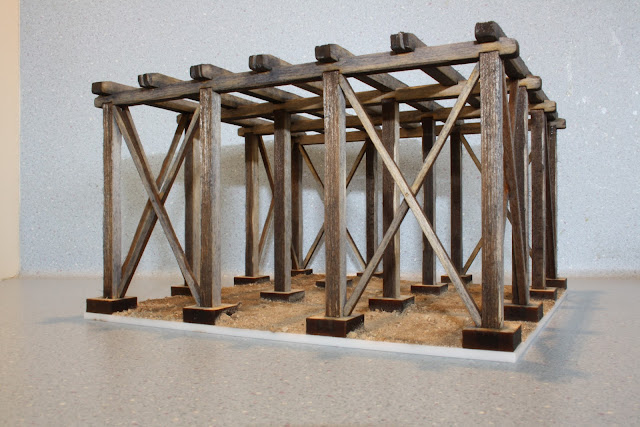 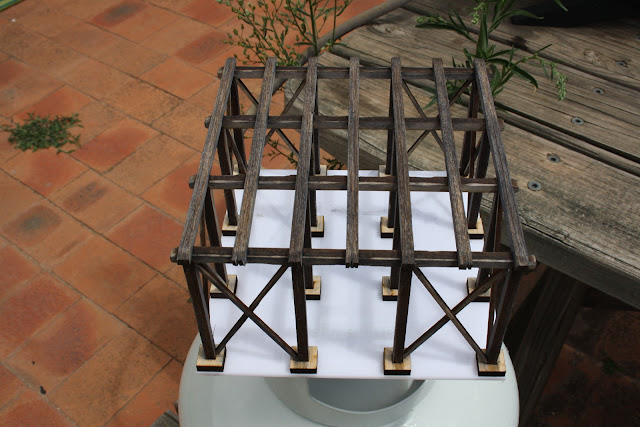 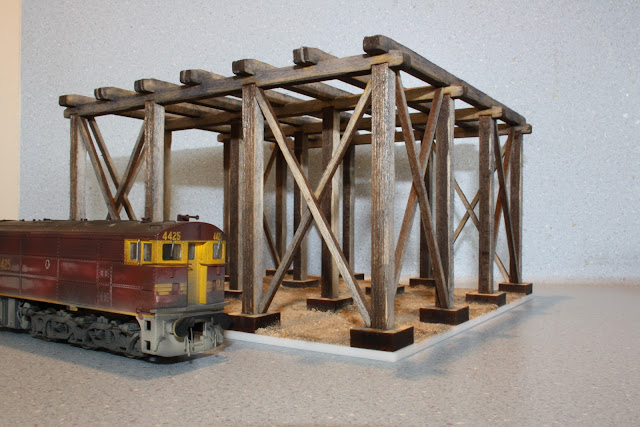