Jumbo Gets A Voice...The Final Chapter

Well the speakers & other items arrived during the week so an afternoon was spent finalising the Tsunami/DCC fitment to 44214.

After perusing the available speakers it was decided to re-examine the original idea of placing the speaker at one end with the decoder capacitor....with the upshot being that speaker wires were run to the opposite end of the chassis & both items now have thier own homes.  The speaker finally decided upon was a 20mm x 10mm High Bass unit as supplied by the ever obliging & patient Warren at Gwydir Valley Models.  The enclosure was modified from an existing larger unit & all now sits well within the confines of the loco chassis end.

A trial was undertaken without the body fitted to ensure that all operated as planned & the trial was very promising.  As per usual the loco will visit the Decoder Pro bench for final tuning.  It is interesting that this loco as well as the 49s appear ( after conversion ) to be a tiny bit jerky at extremely low speed & while i might just be a touch anal, I would like to sort this issue out & believe it to have something to do with the back EMF settings.  I will undertake a crash course in this aspect of programming & indeed if Mr Pilgrim reads this post...he may be prompted to tackle the riddle on his Bylong blogsite...HINT HINT, Ray.

During fitment of the body the horror of all horrors was experienced & that being it would not properly seat on the chassis.   Everything was checked & double checked for height clearances which revealed nothing. It was decided to make a cuppa & have a smoke...my answer to any problem... this corresponded with a couple of rare visiting 82 class passing the hacienda on a down empty wheat...so after clearing my head another look was undertaken.  The problem was eventually found & it was due to the LEDs sitting too far forward on the chassis & clashing with the headlight lens in the loco body.  Mods complete & now all fits as it should.

The loco is now in service for the short term until I have a chance to tackle enhancement mods & weathering etc etc.

With regards to weathering... .  I certainly favour heavy weathering but with my chosen era being late 60s / mid 70s  a complete rethink of my normal weathering style will need to be undertaken.  Most of the "second generation" D/E  locos were relatively new or entering service during this period & it would seem more love and attention was bestowed on the fleet in those times...so it would appear that i will have to create more subtle methods where these locos are concerned & leave the heavy stuff for the ageing steam & rollingstock fleet.

Well thats about it with the jumbo conversion...I have learnt a lot & the confidence levels grow.  The next loco class to be tackled will be the Austrains 80 clsss & will post the journey if I haven't bored everyone  #*&%less with this conversion. 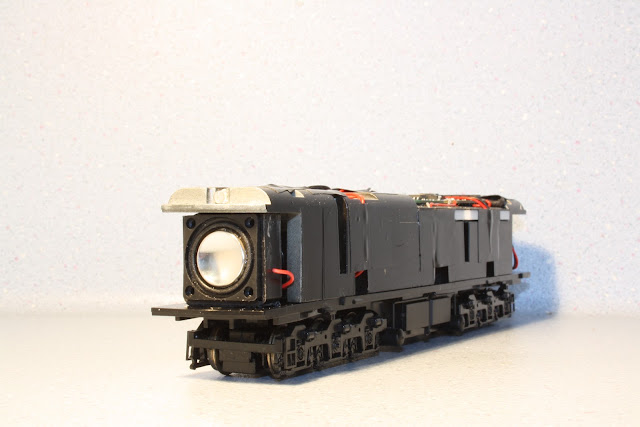 Speaker & enclosure fitted to one end... 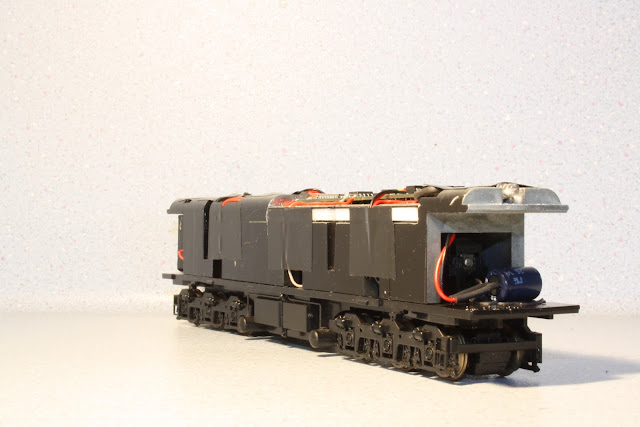 Capacitor mounted in the other end... 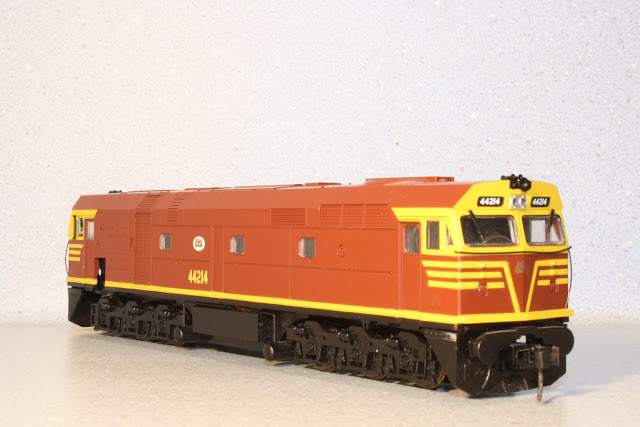 442 now complete....Lots of detail work to do on the body etc before totally road ready....Choice of handrail material was very questionable on this loco ex factory...
Posted by Rod at 19:24