Is That Cream With Your Coal Sir...?

I spent a fair amount of time in the last couple of weeks boning up on the variations in timber based,  elevated water tanks at various locations around the state trying to choose one to model.  One aspect of this decision would be based on commercially available tanks that could be placed on the chosen structure.

By last Friday i had arrived at my decision & intended on working up the components for the structure over the weekend.  I am not sure why i had trepidations about this comparatively simple job,  when on Saturday morning i fired up my favourite old laser & went to the timber cupboard to get some sheet basswood.  It was then that the penny dropped....there is no commercially available sheet in either basswood or balsa that is a scale 12'' thick.  I knew i had gone down this road before & now realised why i had nagging doubts about this job....  Sure there is "stick" basswood available in the required size,  but this does not allow the cutting & shaping of many components at once.....Bugger....  I will probably just order in a heap of stick product & make up a jig where precuts can be machined but this does not help me on a Saturday morning where the weather outside is conducive to a days modelling.

All dressed up & nowhere to go... it was time to go back over one project & get it right...then move on to another that i want to incorporate on the layout...

Armed with a fair amount of feedback from many sources i attacked the coal stage project & decided to make up a single sided shorter version based on the 50' version.  The plans i have show it as installed on a sloping site & while this would be an interesting way to model it, common sense prevailed & i opted for the level sited version.  Regulars who follow this blog will be aware that there were also a couple of technical issues with the first incarnation & i attempted to address these shortcomings as well.

The deck was the first item to be modified, with bolt detail toned down & the recesses for the sheet post braces cut out during the lasering process  This now makes locating the posts a lot simpler & also allows easy alignment of the under deck outer joists to ensure a neat fit between these components.   Next was the inclusion of internal bolt detail to the bin sheets.

Please Note...The model in the attached photos is yet to have the underdeck bracing fitted.

Again with feedback in mind i think this coal stage version will be the first kit to be released....

I want to incorporate a Cream Shed on my layout & i decided to make a start on this project as well.

There are a few variations that i have on file here & i decided to go with a version that was platform sited because that is where the first shed will be installed at Fish River Station.  I must admit this was a wlcome change as machining & fitting piles was getting to be a pain in the bum....( There is a pun in there somewhere )

I commenced with lasering the inner frames & base components & then hand fitted the cladding the weatherboards being one or two piece per frame & the skinny wrot boards added individually..... I have no idea where the term "wrot boards" comes from...but i will surely investigate.

The roof frame including one piece with battens is complete as are the barge boards & the corner wall trims & i will complete this over the coming week & post the completed shed.

I ran out of time this weekend on both projects... but decided to post a couple of piccies so as to share progress.

Have a great week!!! 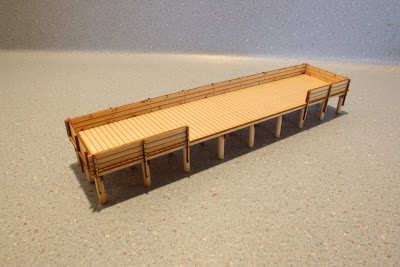 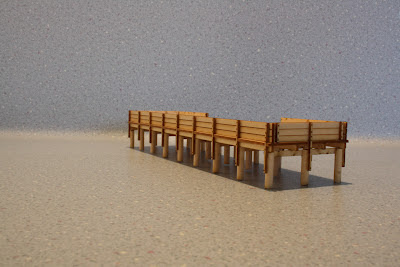 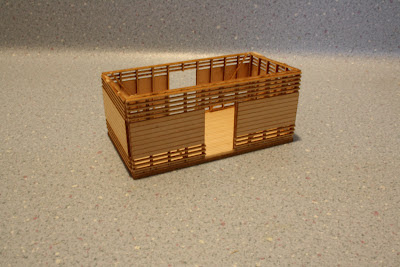 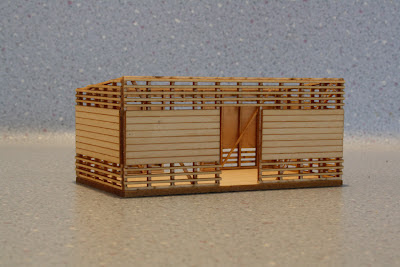 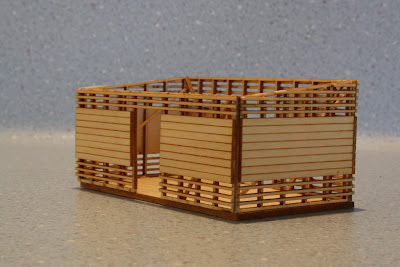