Just a quick update & thanks to the people on & off blog who have offered advice & words of encouragement with this project.

The logical next step & a point touched on in the last post was the need to have the options for fence termination.

During a chance chat with a local fencing contractor who has over 50 years in the trade & certainly let me know it...i need to get the terminology correct as he was outraged when i refered to the "slope sections" of fence.....I now need to refer to them as "raked panels"

So with tail between my  legs & a page of typical dimensions.....i returned to the workshop & have now produced one option for raked panels & the photos are below.

As an aside...Goulburn is an interesting place to research fences.  It is amazing how very few typical two rail hardwood paling fences still exist.  I am not sure whether the same is occuring in metropolitan areas...but the shift away from these traditional styles is not noticeable until you have a reason to look....Hmmm that is the same fact with all things railways...if you don't record it today it is gone tomorrow...

Anyway at this present time i have gone as far as i can with this project until later this month when the birch sheeting turns up & a decision made on what paling panel material to run with.

I will address the issue of a gluing jig during this coming week as even though i have had no trouble assembling the panels on the bench....even with my feeble, post brain tumour fingers....( the reason i am known as the "Retard" ) i think a jig would speed up production when many panels are needed.

On the matter of quantity per pack when the commercial realities need to be addressed, I am still not decided.  Some people have proffered that a traditional quarter acre block of fencing should constitute a pack & a companion pack containing an amount equal to an adjoining rear & side fence be offered &  while i cannot argue with this logic, it must be remembered that layout compression dictates that smaller blocks would be the norm on most layouts.....Stay tuned on this one...Gates will probably follow.

So on to the photos...they need no other description other than the distressed & weathered panels were hurriedly done this afternoon & even though they have had only one coat of the raven oil mix....it aint my best work...but hey we all have bad days... 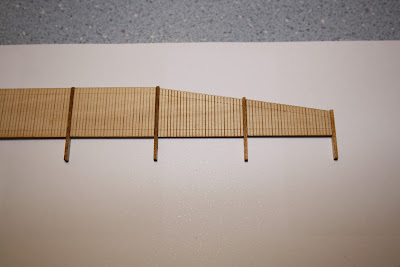 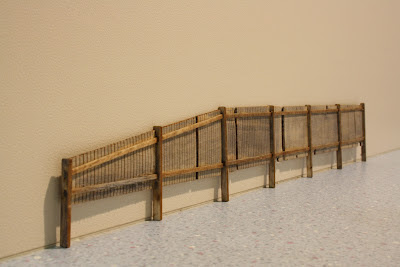 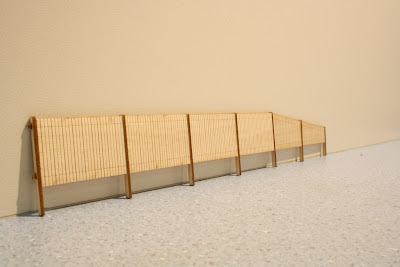