Well it has been a while between posts...and by now I would have figured I would have posted some sort of progress on the "new" layout.  As per life, there have been some twists and turns that have changed things somewhat and with family input and compromises...things are again on the move.

We had booked a local carpenter (friend) to lend us a hand to dismantle the existing layout and reconfigure the shed for business use.  This work was scheduled to begin in mid January and in the meantime I had been packing and stacking the modelling items, with some being Ebayised in readiness for his arrival. In late December I began to lift some trackwork in the hope that some could be salvaged but that operation only lasted an hour or so before I lost interest due to the thought of how much time went into laying it in the first place.  This one loss of destructive appetite would later play a big part in the ultimate decision making process in the hobby stakes.

In the week leading up to the shed conversion...The carpenter arrived to gain a final understanding on our requirements and to make a list all items required for the work.  As we toured the layout room and the adjacent shed area, I could tell that his mind was not entirely on the task at hand and his gaze seemed to be drawn to the layout itself.  At that point my wife arrived with a cuppa for us both and it was then that our contractor decided to unload.  His first point of conversation was to enquire as to whether we had looked at ALL options for the business and this question was quickly followed with a friendly but expletive ridden tirade on the sanity of destroying all the many hours that had been "invested" in the layout.

Well the upshot is that he did ultimately come up with some very sound options and as at the end of January 2015...the business has ended up with much of what was required and the medium term survival of Fish River has been offered up.  Secretly, the family have been watching my disposition over the last few months since the demise of the layout was first raised and it would now appear that it was not only me who was agonising over the loss.  And to celebrate the reprieve I received the "homecoming" gift of a Trainorama 48 class and an Auscision 45 Class!....I should make these decisions more often!   As for the planned replacement 009 layout...I will certainly be pursuing this as well, as I now have much of what is required for at least a diorama and this will lend itself perfectly to those cold winter days in the Tablelands where even a trip to the shed is a harsh decision.

And now with that all out of the way...I will end this post with my initial thoughts on the Trainorama 48 class and experience gained with my first DCC and Sound conversion in quite a while.

Out of the box it would appear that Trainorama have produced a very nice model.  My model (4819) has all the attributes that we have become used to from this manufacturer and the overall appearance, paint, detail etc does not disappoint. In saying this, at least two side mirrors have been applied crookedly, the sliding window panels have no "frame" to even simulate the prototype and the side filters appear to be an added part during manufacture and mine must have been fitted on a Monday.  The other appearance issue is the wiring loom running (visibly) through the cab?...surely we have gone beyond this???.  Obviously everyone has differing expectations and of course this is my view only.

I decided to add the DCC Sound conversion kit to my loco and of course this requires the removal of the body which compared to the Powerline equivalent was an absolute dream....Although joy was seriously tempered during reassembly, where one needs to reattach the brake chain and this was certainly a testing task for a middle aged fart with failing eyesight and an aversion to tweezers!  I have left the chain off for now!

The DCC conversion went relatively smoothly.  The Trainorama supplied speaker had to be replaced due to the use of the Loksound V4 decoder and while Trainorama should be applauded for supplying a true "sound ready" locomotive, the decision to incorporate the rear lighting assembly as part of the speaker enclosure is questionable as is the choice to mount the whole assembly to the chassis with the use of tape ONLY...

As I have yet to tweak the loco under decoder-pro...I can only offer my findings based on simple programming thru NCE.  There is a slight audible motor whine at low speed which should be solved thru decoder pro or running in might also see the noise diminish  I am traditionally an unabashed Tsunami fan...but as I get older, the thought of pulling each loco apart to fit decoders, speakers and sort out ever increasingly sophisticated lighting circuits, has lost some of it's gloss and in the case of the 48 class ( as was the same with the 422 conversion) it was just plain easier to fit the DCC Sound offering.  While the sounds of the 48 Class can only be described as brilliant, as is the horn...I was disappointed to find that CV63 ( Master Volume ) was factory set at the upper limit and my installation requires a fair increase in volume just to overcome engine noise.  Maybe a variation in speaker choice could add a slight increase in volume...but as the supplied speaker is hard wired to the decoder...it should be adequate, but certainly not in my case.

Another difference between Tsunami and Loksound is the notching...where the Tsunami offering can basically work acceptably "straight out the box"....The Loksound decoder appears to only offer manual notching which is a definite deviation from my habits and could end up being a right pain in the butt...time will tell.  My other fear is multiple loco lashups where the differences between the brands could see more on track "arguments" between the locos and speed matching being an absolute pain, if not impossible.

I now have a decision to make regarding the 45 class conversion and will ponder the decoder choice in the coming days...in the meantime I have included a shot of the converted 48 class.

It is nice to be back blogging the NSWGR... 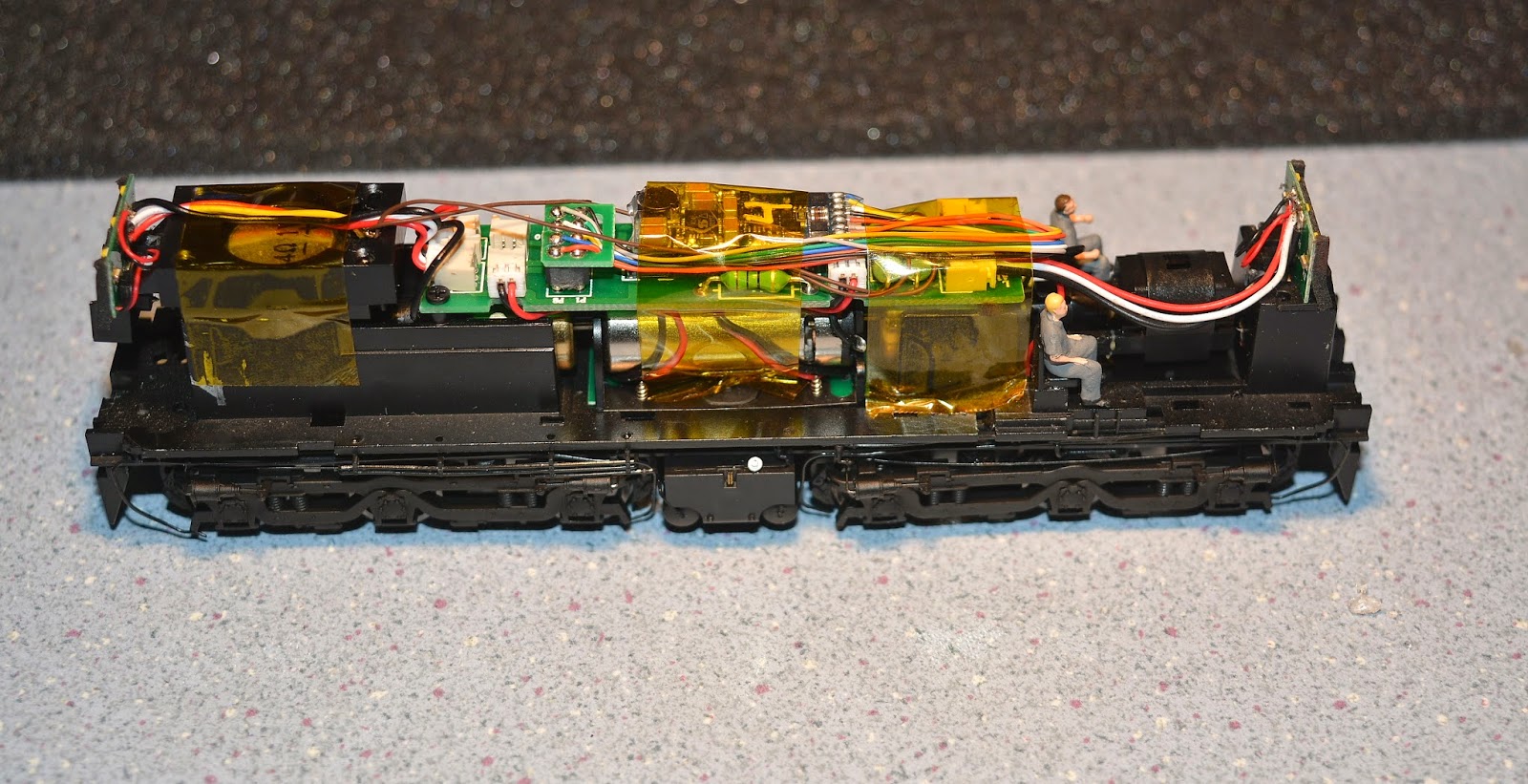