Well the modelling room is now totally complete and ready to be "lived in".  Maybe the term "totally complete" is a bit of a misnomer where anything model railways is concerned but I now have a well laid out room that is away from the layout room and away from the house.  Over the next couple of weeks I will populate the room and sort out the storage issues and creature comforts in this man-cave within a man-cave.

I have however progressed the railway access to this room and have completed the "tunnel" which is essentially a hole in the wall.  The initial trackwork in this room, will consist of a master siding with run around or loco escape and a dead end siding.  I do have to admit that the bench height in the modelling room should have had a bit more thought put into it. I was governed by the window sill height in this room...but now with the rail extension entering this room at layout room level...I have only around 55mm+/- between rail level and the installed benchwork (refer photo) and this will require some thought if Cobalt point motors are to be utilised here.  It may be that I will have to also cut clearance holes in the benchwork to allow clear fitment....ah well it will all become apparent in later posts I guess. 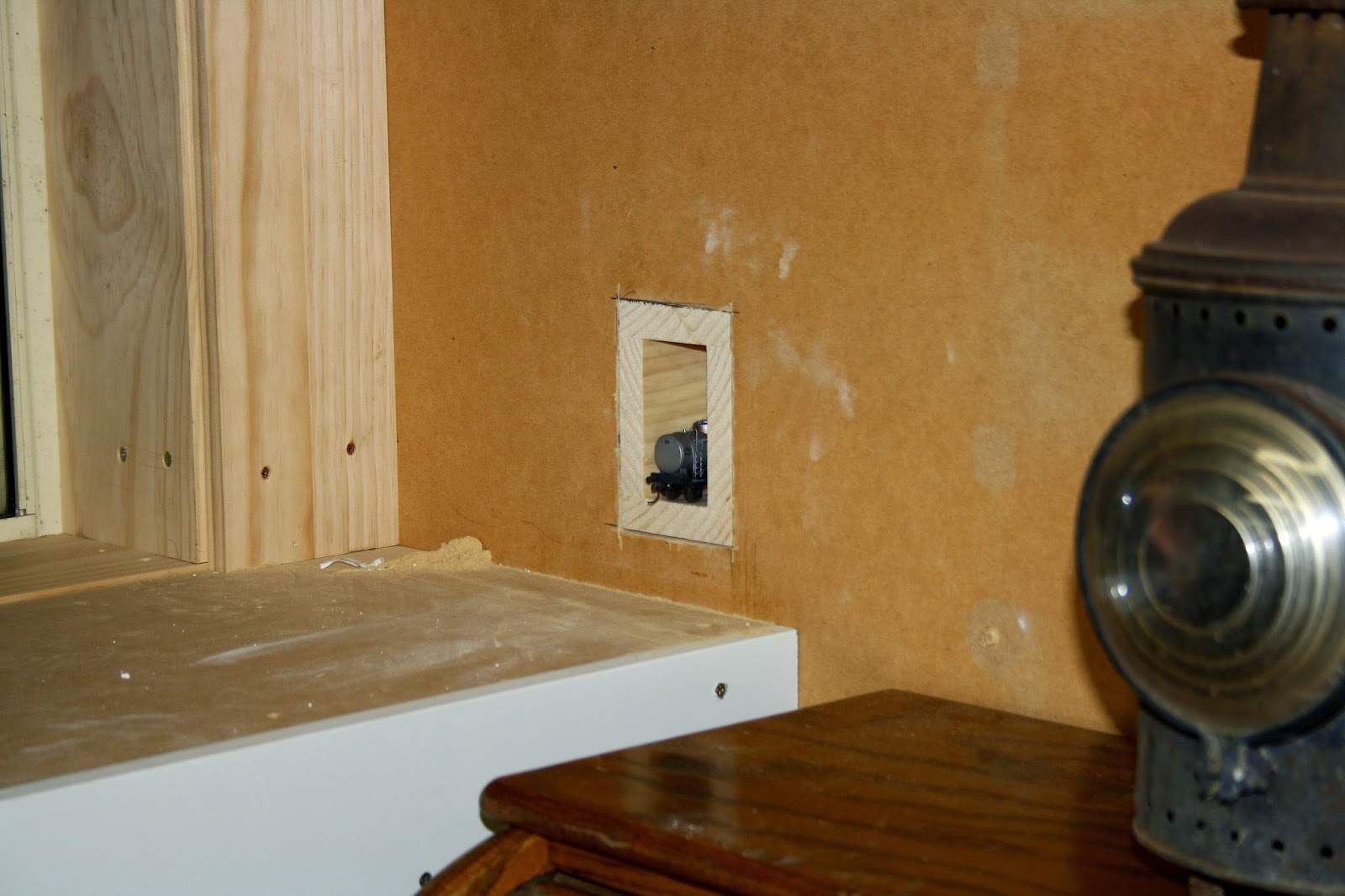 While awaiting the Trainorama 48 class release...I have relented and purchased a Powerline 48 to add to the fleet and while I have read mixed reviews of this offering...I have decided to convert this example of the mighty 48 class to DCC and Sound and carry out a few more modifications along the way.  As part of this process I thought it might be fun to record the conversion via the blog and of course it will be written in instalments as tasks are completed.
I guess a "mini review" of the out of the box model should precede the conversion...so here are my initial thoughts.
The model, on first inspection, certainly is impressive and appears to be a more than fair facsimile of these workhorses of the NSW fleet.  I must point out that I was disappointed that there were no written instruction sheets that came with the model. In light of the fact that this is a dual mode model which allows DC operation as well as DCC operation, and the selector switch requires the removal of the body to activate...I find the absence of any written information beyond belief...  What is also obvious is the removable hatch located between the fan and the exhaust stack on the roof of the long end hood... although I am yet to workout what this hatch allows access to???.  Anyway the rest of my "review" will follow as part of the conversion process.
This afternoon I decided to undertake the task of removing the body from the chassis and while I had read the varying degrees of success that other modellers have had with what should be a rather easy exercise...I have to state that it was a very trying hour or so as I cajoled the body away from the chassis and as others have suggested...it is a pig of a job.
Firstly the two couplers were removed and the four body screws were removed.  On other models this should now allow the body to simply come apart from the chassis...not so here!.  Apart from the tight fit of the two mating parts...there is also the issue of the buffer locating pins that extend inboard thru the pilots, fouling the chassis removal.  The options are either to remove these pins or to bend the pilots outwardly enough to allow the chassis to clear them.
With the body now removed and an ever growing pile of detail items that have been dislodged during the process...the first thing that becomes apparent is that the "crew" will need to be relieved.  The installed offerings quaintly resemble the green "army men" that I played with as a child and are devoid of any painted features which is magnified by the fact that the loco is modelled with open cab side windows, making these little green blobs even more conspicuous.   I am certain that I have a more suitable replacement crew from the "B" end of a Trainorama loco...
﻿
The next puzzling feature of this model is the placement of the DC/DCC selector slide switch...which requires the removal of the body to gain access...As stated earlier...I have no idea just what the removable roof hatch is for???.  Someone more learned than me might reveal the true reasoning for it's placement and use and why the selector switch could not have been installed in a more easily accessible location... For me the issue will not prove to be a long term negative as most of the existing electrical internals will be discarded when the DCC / Sound conversion is completed
In the next instalment...the DCCSound conversion kit should have arrived and I will move on to stripping the loco for decoder and speaker fitment, wiring mods...In the meantime I will scour the web for info from the "trailblazers" of this particular conversion...
Posted by Rod at 22:45