With the modelling room now well on it's way towards completion, a change of pace was required and I took some time to move ahead with the Captain's Flat ore loader.  I have decided to build the structure into a mini diorama so that if it does not end up as an inclusion on the layout it will at least have a home that can be added to the "shelf" pieces I have already built.  I say "if" included for good reason as the only logical place for it and associated sidings on the layout would be on the as yet uncompleted section of the layout which is directly opposite Fish River yard.

So with the diorama carcass built, it was time to research and construct the weighman's hut which on the prototype, was located directly under the loader shed and adjacent to the track. With this quaint...but rudimentary little shed basically completed, the whole structure can be placed onto the diorama so that final scenery contours can be worked out.

As I studied the prototype photos for the gazzilionth time...it is not difficult to be drawn into imagining what it must have been like to have worked in this relatively harsh environment.  I guess the weighman would have had other duties as I can't imagine that this job would have been a day to day "whole of shift" proposition. As there was no stockpiling of ore at the loader, the job obviously depended on when wagons were available to load and the frequency of trains.  I have no idea if there was any "manual" movement of wagons...so there certainly would have been down time at this location.  Perhaps the weighman was also engaged in work associated with the goods shed that was opposite and adjacent to the loader.  Or he may well have been purloined from the actual mine when and as required.  At the end of the day it would have been a fairly dirty, dusty, noisy and unpleasant job as the ore free fell from the trucks above, through the chute and into the S and K trucks within almost arms length from his workstation.  Winters would have been uncomfortable and summers would have been almost unbearable with the ever present danger of snakes and other vermin having almost free access to the poorly insulated and sealed "office".   I have learnt that there was a fuel stove in the shed and also a communication tube between the shed and the loader above, which allowed communications between the truck driver and weighman.  Apart from the items spoken of here and of course the actual weighscale...it would appear that creature comforts were minimal and it certainly was a spartan existence.  I have also come across some period photos that show there were raised platforms either side of the loader and adjacent to the outer rail that I imagine were used for "trimming" the loads and I guess this would have entailed extra workers at peak times.  I am not sure whether I will include these platforms in the actual model...but I guess for fidelity sake I should research them further as they would certainly add visual interest to the scene.

The scenery will be a fairly easy and plain operation as one thing that was still obvious up until a few years ago is that the ore slurry and tailings that had built up in the soil over many years, certainly curtailed any plant growth near the rail corridor.  Indeed it took over 40 years for any real recovery of the plant life within the corridor of the bulk of the branch to gain any obvious foothold.

I have also been fortunate to have found some road trucks that match the type used on the prototype, amongst my large collection of "stuff" and I will certainly convert at least two of them once the final detailing takes place.  As can be seen in the attached photos, I have also decided to include two sidings on the diorama and while one will be the actual loader road, I will try and include a yard crane straddling the other siding.  There was one located on the prototype just beyond the loader and adjacent to the goods shed and it's inclusion on the diorama will add scenic value I feel.  One other feature will be the inclusion of the actual weighbridge decking and this will be constructed from laser etched and cut engraving plastic with the casting patterns and detail included. 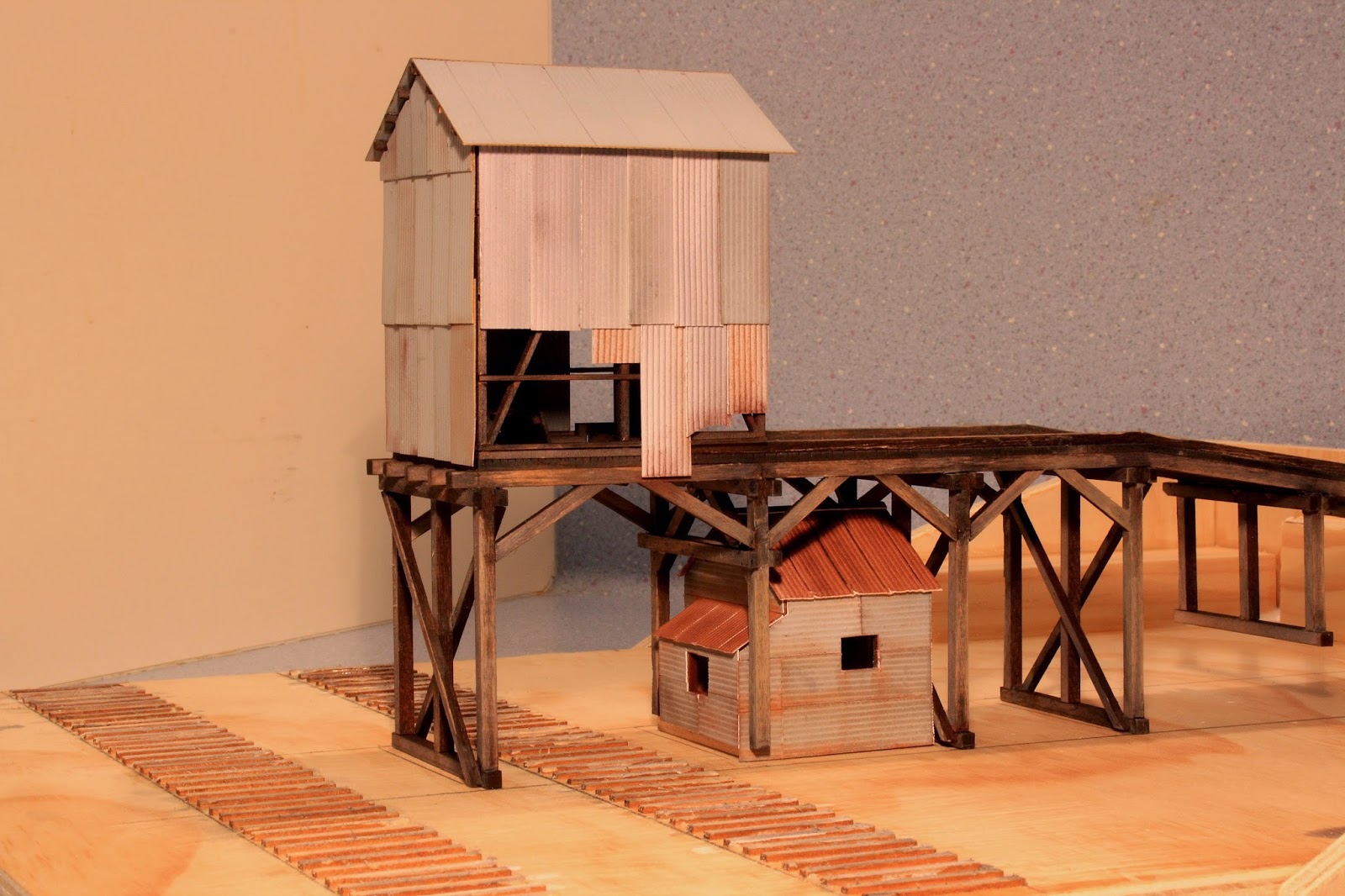 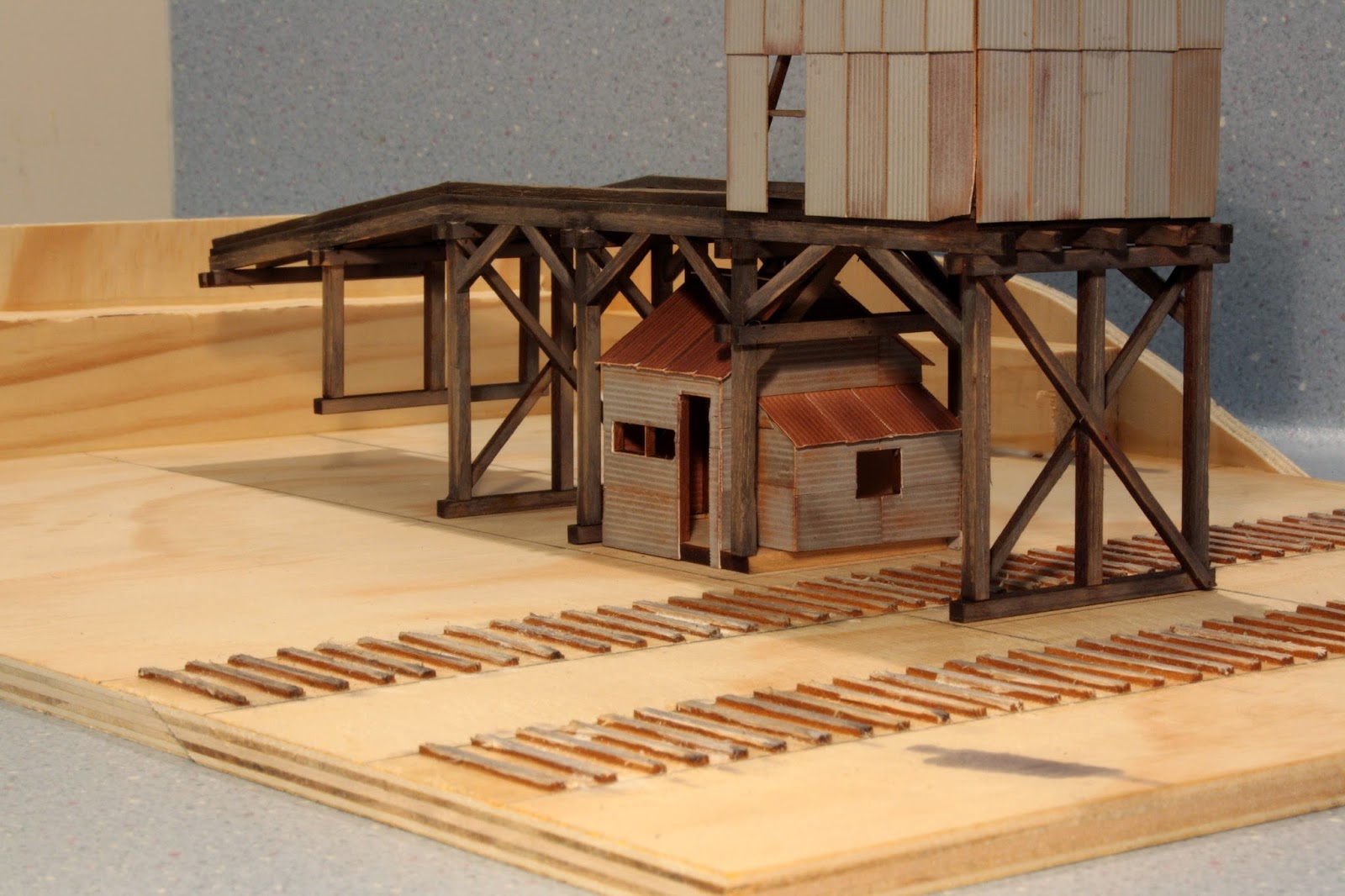 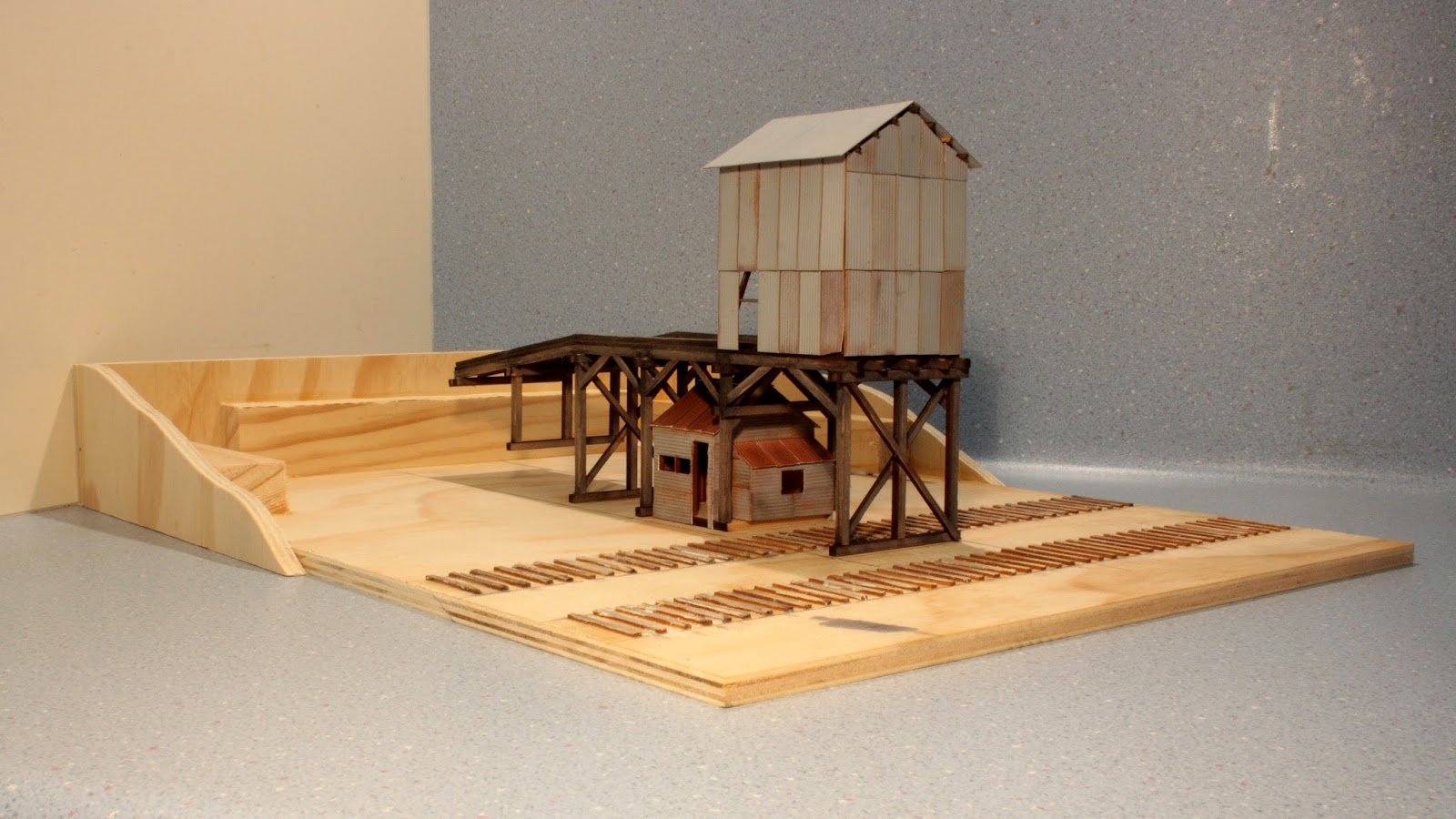