Where has the time gone?...In my last blog posting I explained my reasoning behind a change in direction for me in the hobby.  I must explain at the outset that I have not indeed succumbed to some sort of life threatening illness nor have I "gone around the twist completely" as some other people ( including some family ) proffered.

While working for yourself allows some flexibility and other "perks", it does come with some other pressures that are sometimes hard to explain...even to those that are closest.  Lack of day to day interaction with human beings is one of the downsides which does mean that any issues going around in your mind are only ever shared over the nightly meal or through telephone conversations in most instances.  Another issue that came on board around 8 or 9 years ago with the advent of Laser Rail Bits was that my hobby was now becoming part of the business and vice versa.  Consequently this also started to blur the lines with home life and the hobby as well and I was finding it increasingly difficult to find enjoyment and escape in the things that mattered the most.  Again...don't get me wrong, I love all aspects of my life but I needed to take stock, make some changes and start to focus again.

As this is a model railway blog...I won't dwell on the business side of things too much other than to say that certain changes have been made that have jettisoned some unprofitable and time consuming aspects of the business that has now freed up time to concentrate more on Laser Rail Bits and has led to an overall increasing clarity on where I am and what I am doing.

On the model side of things...the decision to mothball the layout was made and a fair amount of rollingstock and structures were liquidated in haste. In hindsight, some decisions to sell some items was probably regrettable...but strangely refreshing as it now gives a blank canvas approach and recent trips to the layout room have had a feeling that the juices are starting to flow again and a return may not be too far off.  These train room visits, armed with the obligatory cup of tea have seen me run a loco or two and I have found myself playing the "what if" game inside my head about changes to trackplan, era and operations in general.   I guess my "brain explosion" of the last few months may have worked?

During these trips to the layout room I have decided that a couple of items must be omitted from the trackplan and they are the two double slips which were originally placed at the up end of  Fish River yard and the junction of the yet to be named branch.  It must be explained that these double slips were placed at a time when the layout was to be based on a double track mainline and now with the decision made ( some time ago ) to revert to a single line working...the function and space saving features of these slips is now redundant.  I personally find double slips a visual blot anyway...so it will be a happy day when they are lifted and traditional points are installed.  At least I was able to master the DCC issues that arise with double slips if nothing else...so the experience was worth it. 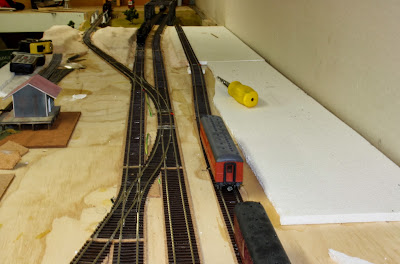 The photo above shows the location of the double slips and a quick explanation should clarify the location... Tracks from left to right in the distance are...Branch, Up Main, Down Main and Flour Mill Siding.

While behind the photographer is Fish River Station and the track leading away (bottom left) is the Fish River Yard access road. 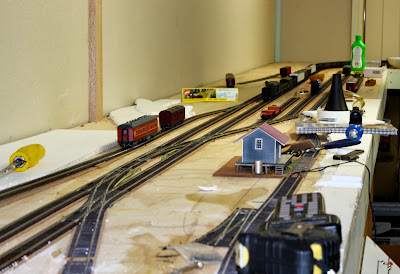 This shot is taken from the opposite end of the yard looking in a down direction with the offending double slips visible centre left...


With the decision to revert to single line working....the Up main is now redundant and will revert to being used as a loop or master siding... The issue I need to address is that if the double slips are removed...the section of "old" up main between the two slips will be removed as well to allow for traditional points to be fitted.  This in turn will not allow the "old" up main to be used as a headshunt for the yard...and will also shorten useable length of the "old" up main as a loop.

There are many permutations to solve the issues but the "not negotiable" aspect is that the slips must go....for both smooth operability and pure aesthetics.  So with Christmas coming up and the possibility of some down time...This puzzle must be solved and a track "shutdown" planned.  Any input from you guys is of course welcome...

On the rollingstock front, I have also booked 6015 in for a strip down, repaint and weathering job and the boxes of remaining 4 wheelers will need to be aged as well...see the juices are beginning to flow!....I wonder if the airbrushes will remember me?

It has been great to actually sit down and "Blog" again and I certainly won't be leaving it this long between posts again!