A few weeks ago a certain recently retired chappie from Bylong made a comment regarding the surface that I had chosen to photograph a piece of infrastructure on, being unflattering to the subject.  As much as this comment was tongue in cheek, it certainly got me thinking about the layout and backdrops etc.  To be believable a scene, diorama or layout does require the blending of rollingstock, infrastructure, scenery, lighting and backdrop to be in concert with one another to portray what we are all trying to achieve.... realism in "little" form.  There are certainly some modellers who appear to make it look simple to achieve the masterpieces that grace the blog sites and printed media that we can easily access...but for me it has and will be a long learning curve of trial and error until I am happy with the finished result.

I have been studying backdrop methods for some time and my decision to end the procrastination and give it a go was made in the last few days and to begin I thought I would go out and take some landscape photos and just have a play.  As a fortunate aside we have large format digital printers as part of the business arsenal and I figured that this methodology of backdrop creation may as well be attempted first.  The attached photos show the results after printing a photo onto adhesive sign vinyl with the resulting print mounted on to some sheet substrate. The diorama was then placed in front of the backdrop and initial shots taken.

So what have I learnt from this first attempt...

Firstly the chosen season would need to be mirrored in both the photo and the 3D modelled landscape so as hues, grass colours and general landscape items marry well.  The angle of the sun when taking the backdrop shots would need to be carefully selected to reflect the desired time of day of the layout if this is an important criteria.  It may be that shots need to be taken in flat light or on slightly overcast days so the shadowing is minimised.  The biggest problem I see in adopting this method for the whole of the layout is blending one shot into another to create a seemless backdrop over a large length of layout...in my case most likely around 9 metres between scenery breaks.  Of course there are computer programs that can stitch together several photos if taken in a careful method...but I wonder whether this would produce an optically curved finished result?.

I will continue to play around and see if most of the above issues can be solved adequately or it may be that the present method is good for diorama or infrastructure shots and painted backdrops may be utilised on the layout. I certainly have no artistic talent for painted backdrops...so it may end up that the job is "subcontracted".  Then again if I look at the present layout progress speed...backdrops may just be a job I can leave to the grandchildren...if I ever have any.

In finishing this post...just a note to the readers of this blog... I have an appointment with a surgeon ( who has promised to put everything back where they found it ) come Monday morning and I hope the next post will be sooner rather than later.  Thanks to you guys for your messages of support...They are greatly appreciated!!! 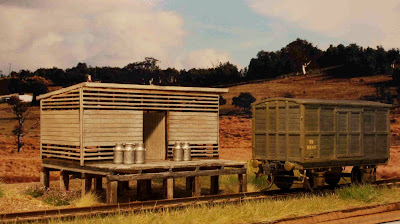 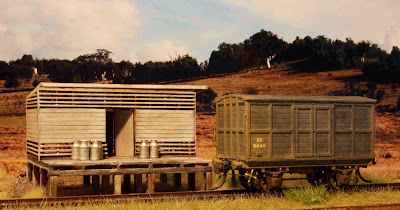 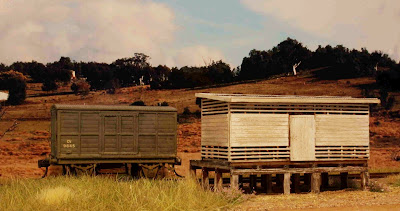