Following on from the last post regarding the double track span, Timber Road Overbridge.... It was back to the research books and also the drawing board this week.  My main concern with the first pilot model was that the bridge girders looked a bit lightweight when compared to the visually pleasing single track version.   When searching for photographic evidence of the girder arrangement it dawned upon me the complete lack of  historical shots of road overbridges in general...I guess the irony is that most photographers shoot from bridges and not at them...More is the pity!!!

I did though unearth an RTA report or study paper entitled Timber Beam Bridges....A Study of Relative Heritage Significance of RTA Controlled Timber Beam Road Bridges.  This 24 page offering is a very interesting read and a font of information on timber beam bridge design...One section also answered the question regarding girders etc

Basically it claims that the standards were....For bridge spans longer than 35 feet ( 11metres ) compound beams were used whereby two 12 inch x 12 inch timbers one above the other would be locked together by a combination of vertical bolts and wooden keys in precut slots across the interface.

By my reckoning...this rule was obviously fairly flexible as i have some records that show shorter spans were compound beams and indeed some longer spans than recommended were not compounded.  One would imagine that the road useage or traffic load would also play a part.  Another interesting fact was that in some bridges the outer girders were dressed or milled square beams but the inner girders were left in their natural state with bark attached in some instances....all for appearance sake.

Anyway i have concocted another pilot with compound girders "through the span" and have decided to have a bit of fun and dress it up a bit by way of painting and weathering.  The weathering is far from complete and the footings need to be converted to faux concrete...but i must admit that the compound girders are easier on my eyes when compared to the previous single girder examples.  Nevertheless it would appear that both designs were certainly seen in prototype service and i guess that legitimises the use of both in model form 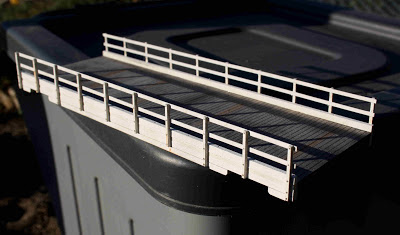 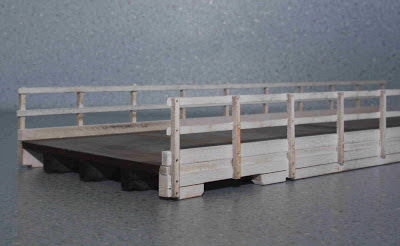 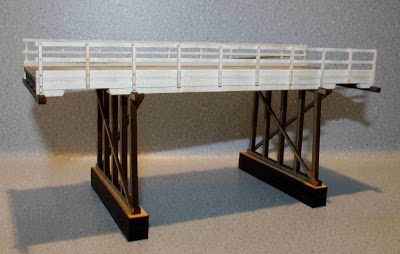 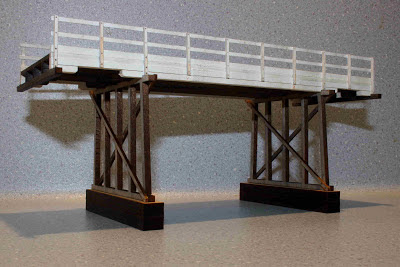 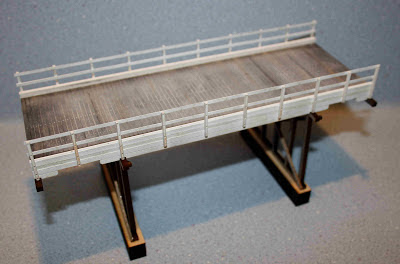