Trackwork on the as yet un-named layout has begun.....I have stated elsewhere on this blog i am sure....but to confirm...Peco code 75 track & points will provide the mainstay of trackage.

I have decided to concentrate construction on the station, yard area & environs  of a location i have named  "Fish River"......No this is not based on the real Fish River located between Goulburn & Gunning on the main south....I just liked the name.

Apart from being a main line station, Fish River will host the junction with a yet to be named branchline.

I guess there are elements of the real Galong & associated Boorowa branch  in the junction arrangement ie. slips being used.  I decided to use double slips as a way of saving space...


It must be obvious by now that this layout is evolving as it goes.....I have got a mud map drawn up....but as time goes by i keep modifying & or changing things.....
To put things into some perspective....please peruse the following plans & photos....The plan will be updated when in an "As Built" state.
The main line & yard area of Fish River is fairly obvious although some mods to trackwork have already occurred....
The branch can be seen leaving the main line crossing the bridge & entering what will be the staging area ???... travelling parallel with the main running lines crossing the doorway ( on the right ) travelling parallel & dropping in altitude with the baseboard opposite Fish River...looping under that bench & terminating in thin air between the existing baseboards....This will eventually be an island containing the branch terminus....it may well end up as a fairly lengthy island & end adjacent to the doorway on the right.
Apart from Fish River & the Branch...i am  yet to decide how the rest of the layout will operate & as such there is no plan at this stage..
﻿ ﻿
﻿﻿ ﻿﻿
﻿ ﻿ 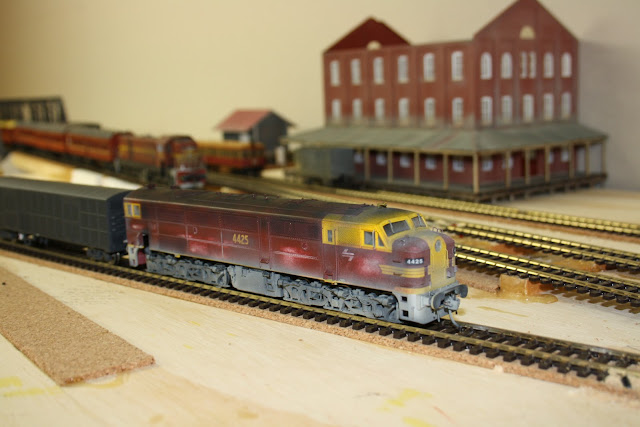 A rather "depth of field challenged" shot of 4425 ( now Tsunami fitted ) & train coming off the branch approaching the main lines while a 49 class & train ( wrong road ) look on.
Regards,
Rod
Posted by Rod at 16:22