As the mercury nudges towards 40 degrees... I found solace inside with the air-con cranked up & the cricket acting as background noise while researching some more local railwayana.  The subject of this second post for the day could also border on another Ripleys.

Picture yourself at an exhibition & you came across this cameo scene on someone's layout... Your first thoughts would probably be... has the guy gone mad!!!.  Well as is often the case with railway infrastructure sometimes fact is certainly stranger than fiction. 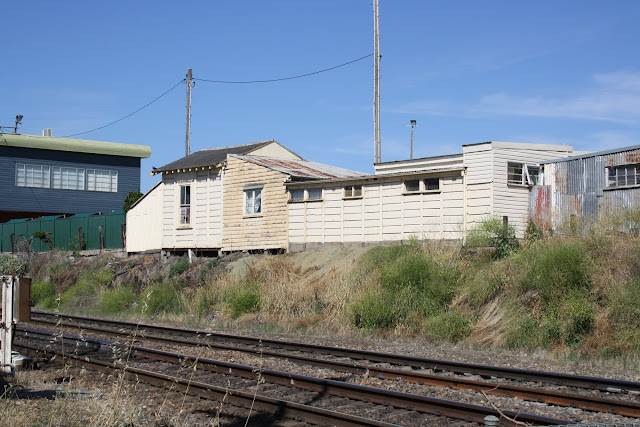 This scene only captured earlier this week is located next to the up main adjacent to the site of the long gone Goulburn North signal box & between the station proper & the Blackshaw Rd level crosssing which is just out of view to the right of shot.

The "buildings" are owned by the Goulburn Bowling Club & i believe are used for general storage & greenkeeping equipment.  Apart from the shemozzle of precast & weatherboard components... the origins of at least one of the items is very interesting.

The PC1 station building was ( widely believed ) salvaged from the site of Willigam on the long closed  Taralga Line.
Willigam was the first station reached on the branch,  after the Taralga Line branched from the Goulburn to Crookwell line at Roslyn.  Modifications to the original structure have taken place over the years as evidenced by the photograph.

For those interested Willigam was roughly 2 miles from Roslyn & the "station" consisted of a 120' platform with a PC1 station building for passenger accomodation located on the Up side of the line with a loop line on the down side.  There was a loading bank opposite the platform on the loop with a sleeper stage at the Taralga end of the loop.

The Crookwell line remained open until the last "commercial movement" to & from Crookwell from Goulburn in March 1984.

I hope this post does offer a source of inspiration for a cameo here & there that will take care of the bits & pieces we all accumulate in the modelling junk draw!!!  Certainly a great scene if modelled in low relief between the track & the backdrop.