It has been a while between posts...A fact i have been reminded about quite a number of times.  One email arrived with the subject heading " Is Anybody There" & that was the sum total of the email!!!

The normal lead up to Christmas around here normally means that business drops off around 1st week of December as clients start to get into the festive mood & oil company budgets dry up & does not pick up again until late January... I like it like that!!!  Not so this year & indeed there is still a backlog of work which has only been tempered by an announcement that we were closing until mid January.  While not technically correct...This was the only way to buy some time to get the gestation period of at least one kit finalised & hopefully leave time to catch up with other matters.

To that end i can state that the Timber Elevated Tank Stand kits have been finalised with packing taking place today & should be completed tomorrow... There will be a separate blog post to deal with this issue tomorrow night.

There has been a lot written in the past couple of years about oil or petrol depots from a modelling perspective & this obviously has coincided with the multitude of releases of rail tank wagons.  Like any self respecting layout builder, I will
of course be adding at least 2 or 3 depots on my layout.  These additions will also be a labour of love as most of my earlier working life was spent in petroleum & petrochemical depots & terminals.

In the quest to research what is left of the local depots i came across another industry in Goulburn that was unintentionally intertwined with at least one oil depot.  This fascinating little branch ( should be classified as a twig ) or gaggle of sidings located within a hundred or so metres of Goulburn Station is steeped with industry & does present a very real possibility to be incorporated into at least my layout....

The location is just south of Goulburn Station ( on the down side of the mainline ) & branches off  the still utilised South Shunting Neck...although nowadays this neck really only serves as a non mainline link from the workshops & roundhouse to the yard ajacent to the station proper.  The branch leaves the neck via a facing point to the left, leaves the mainline corridor & travels down the left or eastern side of Bungonia Rd.  The branch once served at least 3 oil depots, a sawtooth shed that once housed an animal skin warehouse & a Butter Factory.

The only remnants left along this branch are the Mobil Depot ( in early days the Vacuum Oil Depot ) & the Butter Factory.  Sadly of course none are now served by rail with the branch truncating over the years & ultimately closing sometime in the early 80s with Mobil being the last customer.  Nevertheless there is still plenty of evidence of this once relatively busy rural industrial area.

I spent a few days researching & photographing the location recently & have added some photos that may spark some discussion & hopefully some inspiration for others.

The branch leaves the shunting neck just beyond Baxters Boots & another set of points beyond a gate at the start of Bungonia Road marked the entrance to the Mobil Depot...  behind this depot was the Butter Factory which had earlier on one & then two sidings.  Back on the branch proper... it can be seen that the line then serviced another two depots before terminating at the end of the street.  Some locals have told me that the siding extended beyond what is shown above to a sand quarry a little further on but i am yet to find any solid evidence of this at this stage.


The most interesting aspect of this shot is the siding which once served the Mobil Depot....once served the Butter Factory located behind the depot.  The shed with roof just visible to the left of the distant telegraph pole now sits on the alignment of the siding extension to the Butter factory.


This shot is taken further down the branch extension looking back to the site of the last photo.  The road in the foreground leads from Bungonia Road to the Butter Factory at the rear of the Mobil Depot.  As the branch crosses this access road it also marks the end of any real visible traces of the branch extension beyond this point. 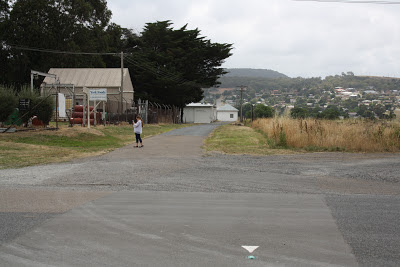 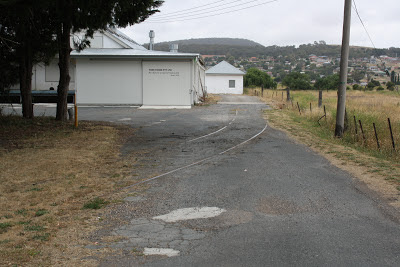 Further on down the access road toward the Butter Factory reveals the remnants of at least one siding. To my left was located a set of points that split the sidings with the visible track serving a small shed used for coal unloading & storage for the boiler  & the other siding to the left leading to a loading dock which is now covered in & its entrance marked by the signwriting on the front wall & some marks in the tar road in front. 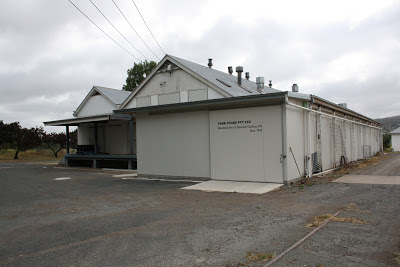 A closer view of the Butter Factory showing where one siding served the now closed in loading dock...which extended the full lenght of the building side.... The coal siding is just visible at bottom right.

To give some idea of the output of this factory... In 1907 under the ownership of the Argyle Cooperative Central Dairy Co. the output for the year was 262.5 tons of butter ( an increase of 10 tons over the previous year ) with 230 boxes of butter being exported to old mother England.

The history of the Butter Factory was a checkered one with it closing & reopening on numerous occasions & this was governed primarily by the farmers moving from dairy operations to wool & beef as the prices ( and expected profits ) fluctuated. Obviously weather & rainfall patterns would have been a governing influence as well. 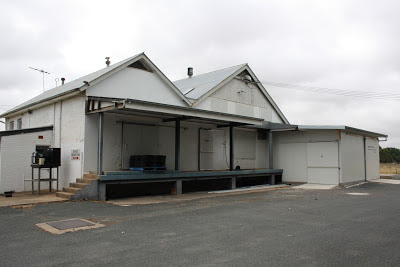 Another view of the Butter Factory showing the architectural aspects... The dock was used for road transport.

The Butter Factory was also used as a Dairy Farmers milk depot in later years.
It has been the home of York Foods for the last 22 years who have a long association with cooking oils & the building is now used as a manufacturing base for their range of speciality products like Wagyu Dripping etc.... I can attest to the products...Yummy 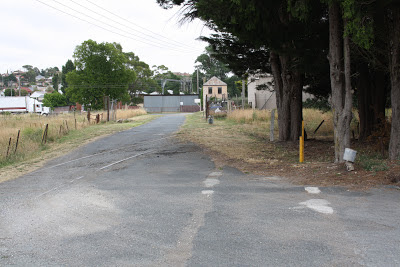 Looking back up the access road toward Bungonia Rd.  With the alignment of the old loading dock siding now more visible....With the coal delivery siding on the left.  The points were located just beyond the large tree & the siding then
traversed through the Mobil Depot... back toward the branch junction & main line... 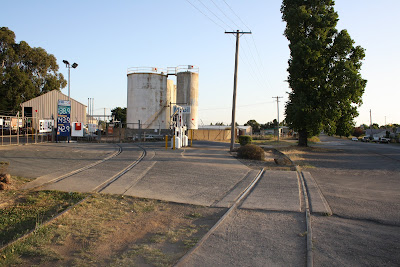 As a closing shot... back in front of the Mobil Depot showing the branch continuation meandering to align itself with the other customers along Bungonia Road...from here the branch extended for another 200 to 300 metres.

In closing i am not sure how unique it is for a branchline to serve another industry requiring shunting through an operational petroleum depot.  It is certainly against all convention.  Some locals tell me it actually happened & some say the storage tanks on the right of the siding were not in existence when the Butter Factory was rail accessed therefore technically it did not happen... Either way it is a nice thought & certainly this location is food for thought when planning layout industry & associated sidings.  I now have compiled a fairly complete history of the Butter Factory & if nothing else it satisfies my want to study the history both rail & social aspects of  interesting locations.
Posted by Rod at 00:01